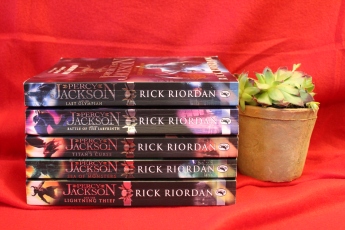 It seems I’ve been on a huge reading spree lately. I’ve been finishing one book after the other and of course… That equals: more reviews!
Yet, this time, I’m able to make one review for five books at once. How? Easy! I started reading Rick Riordan’s Percy Jackson and the Olympians, which as you may or may not know, consists of five books.

Those books have been on my TBR for ages now, so I got the perfect excuse to buy them when visiting a secondhand bookstore. There were some frustrations though. The books present were:

Do you see why I got so frustrated? Indeed! The first book of the series was missing! Like every other bookworm, I still took my chance, bought the four books and had my fingers crossed the whole way home. I just had to find the first book as well – with matching cover. Anyone else has a pet peeve over series with different covers? They have to match, okay?! As luck may have it, I found a secondhand one online. Had to wait two weeks for it, but at least now I have the complete matching series!

Look, I didn’t want to be a half-blood. I never asked to be the son of a Greek God.

I was just a normal kid, going to school, playing basketball, skateboarding. The usual. Until I accidentally vaporized my maths teacher. That’s when things really started going wrong. Now I spend my time fighting with swords, battling monsters with my friends and generally trying to stay alive.

This is the one where Zeus, God of the Sky, thinks I’ve stolen his lightning bolt – and making Zeus angry is a very bad idea.

Can Percy find the lightning bolt before a fully fledged war of the Gods erupts?

Before I start my review, there’s something you should all know about me. I absolutely loathe history. Always have. In school, it was absolute torture. I just couldn’t cram all those facts in my head. Still, I really wanted to read these books. Okay, some of you might say: “Hey, it’s mythology. That’s not the same as history.” True, you’re right. But for me, it’s linked to history enough to say “nope, never mind” pretty fast.

But I did it! And I’m so proud of myself! The biggest plus of all? I actually got interested in the mythology mentioned in the books. That, my fellow Munchworms, is a huge accomplishment on Rick Riordan’s part. On top of that, the May FairyLoot box contained World mythology in bite-sized chunks by Mark Daniels. Pretty sure I’ll be reading it soon.

Now, on to the actual review!

The covers of the book are absolutely awesome. The mythology vibe just oozes off of them. You can actually feel the letters on the cover and that makes it much more fun to hold. I’ve catched myself a couple of times when I was just rubbing those letters while reading. I guess it gave me some sense of comfort, haha!

When I started reading in Percy Jackson and the Lightning Thief, the first paragraph really had me hooked.

Look, I didn’t want to be a half-blood.
If you’re reading this because you think you might be one, my advice is: close this book right now. Believe whatever lie your mom or dad told you about your birth, and try to lead a normal life.
Being a half-blood is dangerous. It’s scary. Most of the time, it gets you killed in painful, nasty ways.
If you’re a normal kid, reading this because you think it’s fiction, great. Read on. I envy you for being able to believe that none of this ever happened.
But if you recognize yourself in these pages – if you feel something stirring inside – stop reading immediately. You might be one of us. And once you know that, it’s only a matter of time before they sense it too, and they’ll come for you.
Don’t say I didn’t warn you.

Do you also get the feeling that maybe, just maybe, you actually want to be a demigod? And you already start hoping that some of the things Percy lives through will sound familiar? I sure did! Of course I got hugely disappointed on that front, cause I’m still plain old me. But hey, we’re all special in our own way, are we not?

The books are written very fluently. I caught myself in a real reading-flow and just kept on going. The chapters occasionally felt on the long side, especially when I wanted to take a break from reading and first wanted to finish a chapter. 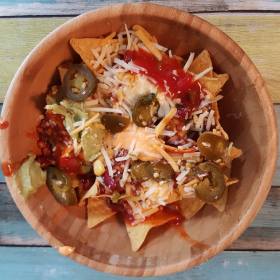 With that, I want to introduce you to the munches I had with these books! Something you just keep grabbing for while reading – or watching tv – without thinking about it. Until you want to grab one more and the bowl is empty. Also, as the books, it’s always a surprise what’s going to be on your nachos. Only guacamole? Or some spicy peppers as well? A load of cheese?

When it comes to the story itself, I sometimes caught myself thinking “Well, that’s convenient.” Sometimes something occurred completely out of the blue that fixed a problem. I only had that feeling during Percy Jackson and the Lightning Thief, though. In the four other books, it never happened again.
On the contrary, the further I got in the series, the more I started falling in love with them and the faster I was flying through the books. [It’s probably good to mention that I started reading on Sunday, June 18th and finished Percy Jackson and the Last Olympian on Sunday, June 25th. Seven days for 5 wonderful books!]

Something that has to be mentioned, is how pleasant it was to read one book after the next. You know those sequels that start with a whole recap of what the previous book was about? Rick Riordan is the hero that does not do that! Of course you get some main things explained every time, but that’s it. In one of the books, it practically went “and that was when that happened. But that story’s too long to tell now.” Hero, I tell you! It made it so much more fun to finish one book and start the next one immediately.

The characters develop in a nice way. You notice how 12-year-old Percy has to mentally grow up and learn to deal with things that even teenagers and grown-ups rather never deal with. He has to take responsibility and, admit it, at that age? Not easy!
Also when it comes to characters – and I’m sure those of you who’ve read the series will agree – go Annabeth! She seriously is a kick-ass girl!

All in all I thought Percy Jackson and the Olympians was worth the read. First, this sentence was followed by “but I probably won’t reread them” and yet… I changed my mind. I think I’ll reread them. Probably not within the next year, but one day, I will. It’s a fun and entertaining way to spend some evenings and – another plus I hadn’t mentioned – you get to learn a bit more about mythology along the way.

At first, I was afraid that I’d be too old by now to enjoy these books, but I’m so glad that Rick Riordan proved me wrong. It feels like one of those series you’re never too old to read and enjoy.

My feelings went on a rollercoaster together with Percy during all five books. From love, friendship and betrayal to fear, tension and laughter. I went through it all and that, my Munchworms, is what I love most about books.

I’d rate the complete series a 4,5/5 because I enjoyed every single book, except for the first one – Percy Jackson and the Lightning Thief – which felt just a tad too childish, too easy for my liking.

Now I can tick off the prompt “Book based on mythology” for my Popsugar Reading Challenge, so yay!

The next book I’ll be reading is.. Roar by Cora Carmack – the book I got in my FairyLoot box this month!

4 thoughts on “Review: Percy Jackson and the Olympians by Rick Riordan”