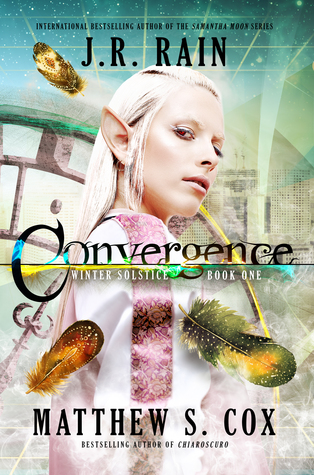 I had the pleasure of being approved to read Convergence by J.R. Rain and Matthew S. Cox. So a big thank you to both of them, and to Curiosity Quills Press!

The cover isn’t one I’d normally pick up – too flashy for my liking – yet it still grabbed my attention because of the elf ears! They ooze fantasy and I was in the mood for just that.

Solstice Winters has spent most of her life halfway between normal society and the world of her magical parents. However, when getting caught between two worlds becomes more than metaphorical, being able to summon light or open locks might not be enough.

Neither her love life nor her professional life are going anywhere in a hurry. Her boyfriend is successful and handsome, but she constantly has to compete with his job for affection. At thirty-two, she works as a photojournalist for The Spirtualist, a small paper dedicated to magic and the supernatural―that most people regard as a tabloid. Desperate for that ‘one break,’ she’ll do almost anything to get that big story and get into a ‘real’ media outlet.

Years of always not quite fitting in begin to make sense after an error at a particle physics laboratory alters the dimensional alignment of the world, strengthening magic and revealing an unexpected truth to Solstice.

She’s not even human.

In the wake of an event her boss at the paper is calling The Convergence, magical beings are appearing all over the Earth. Solstice doesn’t hesitate, racing to be the first to capture indisputable evidence of mythical beasts. Alas, being a magical creature herself, she soon winds up in the cross-hairs of not only a three-letter government agency, but an ancient sect of mages with dark intentions.

The first thing you need to know about this book is that I never got bored, not even a little bit! All events happen in a good pace which barely leaves you time to catch a breath or ask questions. You just want to keep reading!
As soon as you feel like it’s going to slow down a bit, you’re half-way in the next situation Solstice tumbles into. It’s a book that keeps building on the previous layer of the story. I loved that!

There isn’t a whole lot of world-building going on. Yet, in this case I thought it worked perfectly. Solstice has yet to find out what exactly she is, so it makes sense you get to find out everything along with her.

“You can probably finda book about sneaking into cultist strongholds on Kindle,” says Mr. Moody. “They’ve got how-tos on almost everything.”

As for Solstice as a character… There’s no other way to say this then just spill it out. She got on my nerves. Often. She’s supposed to be 34 and yet she keeps acting as a teenager. The way she talks, thinks things… It would’ve probably bothered me less if she’d been pictured as a teenager / young adult, but that wasn’t the case.

Apart from that – not really small – note, I did enjoy her in a way as well. She knew what she wanted and fought for it. I also liked her confidence, especially while she was still finding out what she was, what had happened. Truly, if only everybody was that confident and at ease with being “different”…

I know a lot of people talk to their cats. I feel special because mine answers.

But then came my biggest disappointment! Remember the good pace? The events following upon one another like crazy? You have no idea how sudden that made the end feel! I was convinced I had at least five more chapters to go, that the really good stuff was just about to happen and then… The end.
Still can’t figure out if I like it or not. On the one hand I really don’t because I wanted to read more, find out what was going to happen. On the other hand… Well, I guess I have my motivation to want to read the sequel, right?
Yet, I’m going with the “not liking it”. I would’ve loved it if the story got wrapped up a little bit more so you had at least a sense of closure.

I really do look forward to finding out more about Solstice, her world and whatever is going to happen next though.
The frustrations I had with Solstice as a person and the very sudden end of the book make me give Convergence a 3,5 / 5.

Today’s munches are a bit different than other times. Why? Because I got one of the authors, Matthew S. Cox, to pick a dish for his book! Curious? Here goes:

“I’d have to go with Singapore Chow Mei Fun for Convergence… it’s Sol’s favorite dish. I’m still working out how pissed she is at Diego and if that’s going to translate into her deciding not to like Chinese food as much going forward.”

Really, a huge thank you to Matthew for being the first author ever on my blog to to link a dish to their novel!

I got this book from Clare at Curiosity Quills Press. All opinions are completely my own. I’m not being compensated for reviewing this book in any way.
The picture used of the Chow Mei Fun was found on Google Images. I claim absolutely no right to this picture.