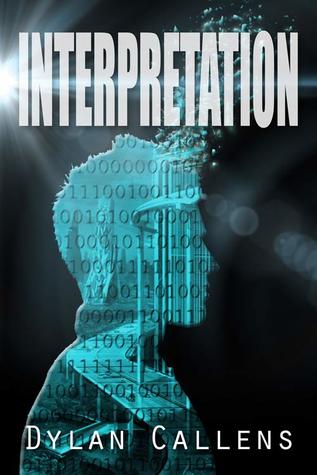 As you all know, I’ve been swamped in read-a-thons, reading challenges and preparations for my road trip. On top of that, I’m a book blogger, which means authors come and find you once in a while and request to read their novels.

And so did Dylan! When I looked up his novel, Interpretation, I can honestly say I was intrigued.  The cover itself is one I’d like to have on my bookshelf to display and the blurb did sound interesting!

Carl Winston awakens to find his son, Liam, screaming with fear. Trying to understand why, Carl tries to soothe him. Neighbors gather in front of Carl’s apartment to help – until they see him. The crowd cowers back, afraid of this monster.

Carl runs. His life of luxury is ripped away. Forced beyond the city limits, Carl sees a land bereft of life. Traveling in search of answers, his quest comes to a sudden halt when he collapses. As darkness shrouds him, a figure hovers from above.

Traveling along the same route, Eva Thomspon finds Carl and nurtures him back to life. Together, they continue the journey, finding out that their lives have too much in common to be a coincidence. As their affection for each other deepens, an unknown nemesis attempts to remove their only source of happiness – their love for each other.

Because of my schedule being completely filled, I asked Dylan to write me something, something considering… well.. Munches! Seriously, what did you guys expect?

The Future of Food

When I first started talking to Kathy, here at Books and Munches, she asked me to include a bit about with which food I would associate my novel.  I started thinking about the post and decided that the whole thing should be about food.  In my novel, food plays an important role.  It’s symbolic of the manipulation that takes place in my novel-world.  More importantly, it asks the question about the future of our own food.

In my novel, Interpretation, people are led to believe that they are eating any kind of food that they like, even though they are not.  If I told you why, it would be spoiler-city.  They think that they are eating burgers when they are actually eating blocks of tofu.  Because of a global food shortage and smaller areas for crops to be grown, soy is the only thing that the government is willing to grow.  But instead of letting everyone know that they are eating this, they just cover up the fact.

The idea had me thinking.  Is something like this really possible?  Not so much the covering-up part, but is the future of food going to be some kind of single-crop that is enriched with a vitamin slurry?  I think about the slop that the crew members of the Nebuchadnezzar are forced to eat in The Matrix and the raunchier alternative presented in Soilent Green.  Even if that isn’t the case, as a worsening global food shortage will inevitably cause prices to rise at the grocery store, what will be affordable?  These things could only get worse in the event of a large-scale war or natural disaster.

If we are to believe renowned technologist, Ray Kurzweil, food won’t even be food within the next twenty years.  Kurzweil predicts that instead of eating, we will be fed by nanobots that provide nutrition directly inside of our bloodstream.  He believes that the act of eating will become obsolete.

Can you imagine this?  Not eating.  This must have a serious impact on evolution.  Inevitably, our stomachs will shrink until we can no longer eat at all.  We wouldn’t be ‘human’ in the same way within a few generations.  Is there a solution?

I have no idea.  The only thing that I can think of is to try all the food that I can now, before we are fed by nanobots.  Or even worse, before the only food left on Earth is tofu (sorry tofu, I do like you – kind of).  So let’s go grab some munches, before there are no munches to be had!

Am I the only one getting the creeps thinking about eating the same thing over and over, even though it tastes like the munches you’re imagining? I hope not! Really, where would my blog go if it would be like that… Oh boy.

Dylan also gave me a little excerpt of Interpretation for you guys!

Carl closed his eyes and tried to laugh at himself.  Barely a squeak left his mouth.  What was he thinking, trying to enter this godforsaken wasteland by himself with no supplies?  Still on his back, he dreamed about opening a bottle of Ocean Surge.  Wet bubbles danced against his tongue, bathing his taste buds with refreshing fruit-infusion – small bursts of happiness made his lips sing an ode to joy.

But forget that fantasy; sulfur-ridden tap water would be just as good.  Carl knew the taste would not equate, but its effect would invigorate.  Carl smiled, his eyes wide open, staring into the dimming sky, into the nothingness that surrounded him.  Gulp after glorious gulp of imaginary liquid until he couldn’t keep up, showering his face with it until a puddle formed around him.  That puddle turned into an ocean and Carl sank to the bottom, his faint breath weakening further.  The light grew dimmer.  He tried to reach up, to reach out of the depths of his hallucination, but his arms felt too heavy, as if the pressure at this depth couldn’t be overcome.

A shadow hovered over him.  Carl tried to speak to it, but words didn’t make sense.  The shadow spoke back with a meaningless, muffled slur.  Water entered Carl’s mouth, nearly choking him.  Nonetheless, the delicious wet felt so good, like ocean refreshment in every bottle.  That was the slogan, right?  Carl laughed or cried, he couldn’t tell.  For all he knew, he was dead.  The shadow grew, saying something that he couldn’t work his mind around.  Darker. Darker.  Clock, what the hell was that clock song?  Darker. The shadow drew nearer.  Or maybe it was the darkness.  It was bought on the morn of the day that he was born, And was always his treasure and pride… Ah yes, there it is.  But it stopped short – never to go again – When the old man died.  That’s the one.  Darkness.

Intrigued? I know I am!

You can purchase Interpration by Dylan Callens on Amazon.com, Barnes and Noble, Kobo or iBooks!

Dylan Callens lands cleanly. That would be the headline of a newspaper built with an anagram generator. And although Dylan is a Welsh name meaning god or hero of the sea, he is not particularly fond of large bodies of water. His last name, Callens, might be Gaelic. If it is, his last name means rock. Rocks sink in the sea. Interestingly, he is neither Welsh nor Gaelic, but rather, French and German. The inherent contradictions and internal conflict in his life are obvious.