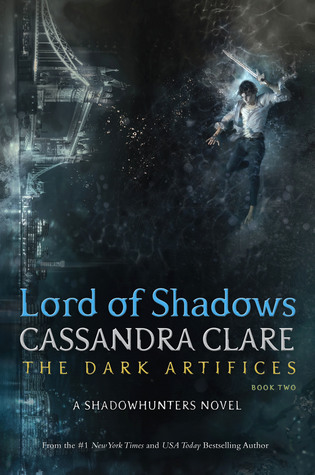 Another review for another sequel. I know I’m drowning you guys in them, but I really, really feel like these books need to be shared! Especially if you’re like me and keep neglecting sequels. Maybe this’ll help you pick some sequels up, haha.

Anyway, as you guys definitely know by now, I’m hosting Sequel September and, thus, am trying my best to catch up on all my neglected sequels.
Lord of Shadows was one of those! Especially since, at first, the third installment was scheduled to be published in 2019. I simply refused to read LoS because of that.
But then I read that the date had changed and the sequel will be published in 2018 after all! Well, hi motivation to pick this one up as soon as possible.

Emma Carstairs has finally avenged her parents. She thought she’d be at peace. But she is anything but calm. Torn between her desire for her parabatai Julian and her desire to protect him from the brutal consequences of parabatai relationships, she has begun dating his brother, Mark. But Mark has spent the past five years trapped in Faerie; can he ever truly be a Shadowhunter again?

And the faerie courts are not silent. The Unseelie King is tired of the Cold Peace, and will no longer concede to the Shadowhunters’ demands. Caught between the demands of faerie and the laws of the Clave, Emma, Julian, and Mark must find a way to come together to defend everything they hold dear—before it’s too late.

I’ve fallen in love with Cassandra Clare’s books from the beginning. I guess we’re with quite a few who have totally indulged in the Shadowhunter world without ever regretting it.

I won’t go on much about Lord of Shadows. I love Clare’s writing, I love the characters she creates – even though I have to admit I’m starting to dislike Julian quite a bit…
Overall, I just love her fantasy, the world she’s been building and keeps on building.

“Sometimes the most ruthless heart speaks the most truth”

The only thing that is getting on my nerves is something that has been pointed out by quite a few before me as well. Simply the fact that Clare has the tendency to give every single character a love story. It feels a bit over the top sometimes and it ruined part of the story for me, really.

9 thoughts on “Mini-Review: Lord of Shadows by Cassandra Clare”