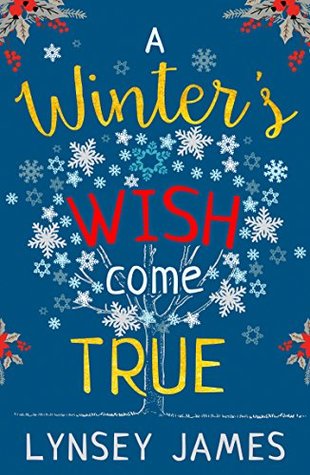 With the air being crisp, cold and completely motivating to cozy up with a book, I decided to get my hands on another Christmassy read!
Earlier this year, I got to read an eARC of The Summer of Hopes and Dreams by Lynsey James so when I found out that Scott and Cleo got more to tell, I jumped at the opportunity!

Being pregnant with her ex-boyfriend’s baby is the last thing on Cleo Jones’s Christmas wish list. Scott might have been the man of her dreams once upon a time, but things change and now Cleo faces a future as a single mum… Or does she?

Scott won’t let Cleo go through this alone; whatever their differences he’s vowed to be there, from antenatal classes to night feeds and nappy changing. The two agree to bring up their baby as friends – but as Cleo’s bump grows, so do their feelings for each other.

Cleo can’t be sure if it’s her heart of her hormones urging her to give Scott a second chance – but getting back together could be the best Christmas present of all!

After Cleo’s battle with her body dysmorphia and her weight, she finally found her place in the world with Scott. But apparently that wasn’t meant to be, since they broke up. A year later, Scott pops back into her life with life-changing consequences.

Even though The Summer of Hopes and Dreams wasn’t really a light read for me, because of the weight-struggles and the familiarity of it all, I was happy that A Winter’s Wish Come True did have a lighter air to it. Although Cleo still struggles with her body dysmorphia, it’s less prominent and doesn’t demand all the attention.
It was a cozy, quick and fun read that had splashes of drama, struggles and tears throughout it all.

As the song goes, guess it’s true I’m not good at a one-night stand.

I loved how Cleo was more sure of herself than she was in the first book, which makes sense since she’s feeling a lot better, gained a lot of confidence and has built the life she wanted for herself.
Scott, on the other hand, ended up disappointing me a bit with how things went between him and Cleo at first. Although I understood his actions, I simply wished he would’ve handled everything differently. It would’ve saved Cleo a lot of heartbreak to say the least!

If there’s one thing I have to remark on, it’s the way some conversations felt forced. Dialogue between the main characters and their family / friends was fluent, but as soon as there was a stranger in the mix, let’s take a nurse for example, things got pretty forced very fast. As if the characters were reading their lines off a piece of paper without any feeling to it.
Maybe a bit less use of the word “bloody” would’ve been nice as well. Although it was charming at times, it felt over the top at other moments. That could’ve been me, though.

And have I really left Chunky Monkey behind if I’m worrying about how my body will change?

In the end, it’s still a beautiful story of two people trying to find each other again because life needs them to get along.

Since it was a cozy Christmas-read and Cleo has a job as a pastry chef, I decided to make some Christmas-themed cupcakes for this!

I received an eARC of this book through NetGalley. All opinions are entirely my own.
I’m not being compensated in any way.