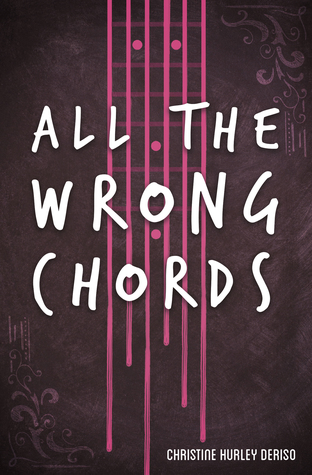 I received this eARC through NetGalley a couple of months back after requesting it because of the – pretty awesome – cover and intriguing blurb.

Scarlett Stiles is desperate for a change of scenery after her older brother, Liam, dies of a drug overdose. But spending the summer with her grandfather wasn’t exactly what she had in mind. Luckily, Scarlett finds something to keep her busy–a local rock band looking for a guitarist. Even though playing guitar has been hard since Liam died, Scarlett can’t pass on an opportunity like this, and she can’t take her eyes off the band’s hot lead singer either. Is real happiness just around the corner? Or will she always be haunted by her brother’s death?

Since I love myself some rock music and, well, add a good-looking musician to it. Yup, sold! I was completely ready to dive into this story.

And I ended up being… disappointed, honestly. This story had the potential of being so much more. Really, it hurts.

Let’s start with the obvious. I really had a giant problem with the insta-love going on in this story. Actual over-the-top insta-love. “Oh, that lead singer is hot. I’m in love.” That’s how it went, literally. Then we go to “Okay, nope. Not in love. Just drooling.” before “Maybe I am in love with him after all.” Does it end there? No! “Oh. Of course! I’m in love with that guy!”
Honestly, Scarlett, could you be even more all over the place? Probably not.

Apart from that, our MC, Scarlett, is a self-absorbed girl who keeps switching from feeling pretty fine to depressive because she lost her brother. Okay, I lost people in my life. I know it’s a struggle and you can go from feeling one thing to the other and back again. But in All The Wrong Chords it just felt wrong, dishonest and fake.
Maybe I’m being too harsh here, but it’s how I felt while reading and I can’t seem to shake it.

She also doesn’t see what’s happening right in front of her. I was about 20% along – I think it was even sooner than that – and I already knew exactly what was going to happen, what “big twists” were going to be revealed during the story. Save to say it was very predictable.

Losing him wasn’t a single loss: It was a million losses, all at the same time.

If the author had just dug a little deeper, gave more depth to her characters and incorporated the hints in a more subtle way, we could’ve had a winner here.
I loved the idea of the book, I did. But when it came to the execution.. I really am disappointed.

For this, I’m only giving this book 2 / 5 because in some weird-ass way I still kind of enjoyed it. At least I was when I was able of ignoring all the negatives.

As for the munches, going with the taco’s that are mentioned during this story! Courtesy of the boyfriend – and, just so you know, he made those way too spicy!

I received this eARC through NetGalley in exchange for an honest review. I’m not being compensated in any way.

18 thoughts on “Review: All The Wrong Chords by Christine Hurley Deriso”