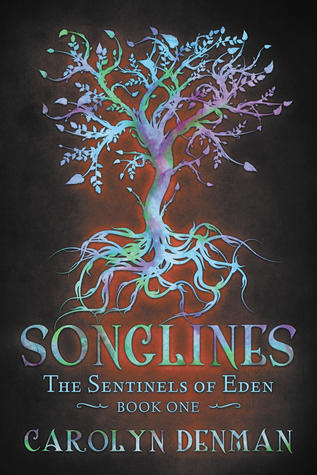 You all know I like my fantasy. What you don’t know is that I don’t believe in any god.
Now you’re probably wondering what those two have to do with each other. Well… In Songlines our MC has the giant task of protecting the gate to Eden. And, of course, Eden has everything to do with faith.

‘We belong to the Earth, Lainie-Bug. We were sent here in human form for a reason. If you don’t know what to do, then just be human.’

Right. Like that was ever a simple thing to do.

In the heart of the Wimmera region of Victoria, an ancient gateway to Eden is kept hidden and safe by a creature so powerful that even the moon would obey her commands – at least it would if she had any idea that she wasn’t just a normal girl about to finish high school.

When a mining company begins exploratory sampling near Lainie’s sheep farm, a family secret is revealed that makes her regret not having learnt more about her Indigenous heritage.

What she’s told by their farmhand, Harry – an Aboriginal elder – can’t possibly be true, but then the most irritating guy in class, Bane, begins to act even more insanely toward her than ever, until she can no longer deny that something very unusual is going on.

When Harry doesn’t return from his quest to seek help to protect the area from the miners, Lainie sets out to discover the truth of her heritage, and of the secret she’s been born to protect.

The idea of guardians protecting the entrance to the Garden of Eden definitely is unique. It’s intriguing and I honestly think it’s one of the more unique stories I’ve read.

Connected to that, it also has to be said that Carolyn Denman really does as much as she can to stay respectful to the beliefs mentioned in her novel. That alone deserves a little round of applause.

But this is where it ends for me…

His one line phrase was about as helpful as a Chihuahua rounding up cattle.

Sometimes it felt like there were way too many details, unnecessary parts and overall just too much information I didn’t really need. Although it didn’t ruin the story for me, it did make it harder to read on and not feel like it’s dragging on and on.

I didn’t feel the romance in this story. I knew up front what would happen so it’s a bit predictable, but apart from that I just couldn’t feel that spark we all love feeling. I might be putting it a bit too harsh but I had the idea that the romance wasn’t real. It didn’t feel authentic.

Something that’s completely on myself is that I couldn’t connect with the characters. The MC, Laini, just isn’t my kind of girl. She goes from acting like an adult to being childish and impulsive to trying to be an adult and… It just didn’t feel genuine after a while. She doubts everything instead of trying to accept things, which made it hard for me to enjoy the story.
Sure, there are things that she should struggle with, and she did, but it lasted and lasted to the point of me getting annoyed with said struggles.

Why did I always have to make life so much more complicated than it needed to be?

Honestly, it’s not that I didn’t like this book, but I didn’t not like it either. I’m just… Meh about it? So that’s why there’s two cupcakes!

As for the munches, there’s pavlova mentioned at some point. Just, random. Pavlova.
It so happens that my boyfriend made lemon pavlova with lemon custard a while back and it was to. die. for. Seriously, I’ve been begging him to make it again, it was so good.

What’s the most delicious homemade dessert you’ve ever eaten?