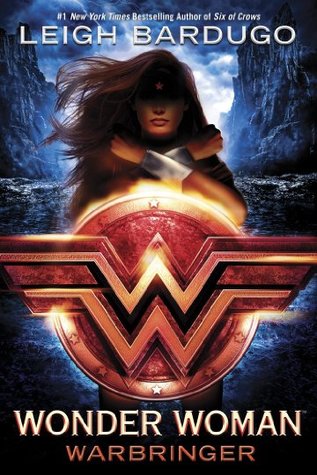 In September, the lovely Naty @ Naty’s Bookshelf sent me a package with two books for me to read. Wonder Woman: Warbringer by Leigh Bardugo was one of them.

I kind of hate leaving gifted books on my TBR but… Yeah, well. I read it eventually!

She will become one of the world’s greatest heroes: WONDER WOMAN. But first she is Diana, Princess of the Amazons. And her fight is just beginning. . . .

Diana longs to prove herself to her legendary warrior sisters. But when the opportunity finally comes, she throws away her chance at glory and breaks Amazon law—risking exile—to save a mere mortal. Even worse, Alia Keralis is no ordinary girl and with this single brave act, Diana may have doomed the world.

Alia just wanted to escape her overprotective brother with a semester at sea. She doesn’t know she is being hunted. When a bomb detonates aboard her ship, Alia is rescued by a mysterious girl of extraordinary strength and forced to confront a horrible truth: Alia is a Warbringer—a direct descendant of the infamous Helen of Troy, fated to bring about an age of bloodshed and misery.

Together, Diana and Alia will face an army of enemies—mortal and divine—determined to either destroy or possess the Warbringer. If they have any hope of saving both their worlds, they will have to stand side by side against the tide of war.

When I started reading, I felt like I was thrown into Diana’s life immediately. I could easily imagine Themyscira, the Amazons and everything surrounding them. I absolutely loved that! This book called to my imagination in the best way.

I have to admit, though, that I’m usually not really one for DC heroes. Sure, I’ve seen my fair amount of movies, but to say I’m actually a fan of them – like I know some people are- is not exactly true. I enjoy them, and that’s it.
This book though? Intrigued! I haven’t heard the ‘original‘ Wonder Woman-story yet, but I do like the way Bardugo’s written this book. I love how Diana seems so human, yet elevated and more.

As for Alia… How I love that girl! She’s painted so realistically. I could easily imagine going through all the emotions she went through during the discoveries she made, the truths she had to face. And Nim’s sass? Oh, yes please! I wish there’d be a whole book for Nim. Love Nim. Give me more Nim!

One thing I really do have to applaud Bardugo for is the way she let Diana’s Amazon-world clash with reality. I expected it to feel wrong in a way, but it so did not. It felt real, it felt possible. Honestly, at some points it felt like I’d suddenly see an Amazon racing through my street. Too bad that didn’t happen…

“A zhua. It’s used for robbing a mounted opponent of her shield.”
“It looks like the world’s deadliest mop.”
Diana considered it. “Perhaps you can use it to scare the floor clean.”

There’s only one thing that kind of bothered me about Diana. Although she’s definitely bad-ass, I’d say she’s missing the sass I usually adore in female MC’s. It made me enjoy this story just that little bit less. It made her more real to have her doubt her own actions, but sometimes I felt like she should’ve been more sure of herself.

“Because the whole world loves to tell us what we can’t do, that we aren’t good enough. The people in your own house should be on your side. It’s the people who never learn the word impossible who make history, because they’re the ones who keep trying.”

So although I did enjoy this novel, it felt lacking at some points which makes it impossible for me to say I absolutely lovedlovedloved it. Four cupcakes!

I have to admit that I’m putting Batman: Nightwalker by Marie Lu higher on my anticipated list now!

As for the munches, there wasn’t really a dish that stood out during this book. Olives, on the other hand, were mentioned quite a lot! Since I’m really not a fan of olives – like, not at all – I’m going to throw a Google-image your way because I’m so not buying olives for the sake of a picture, haha!

This book was gifted to me by a friend. All opinions are entirely my own. I’m not being compensated in any way.