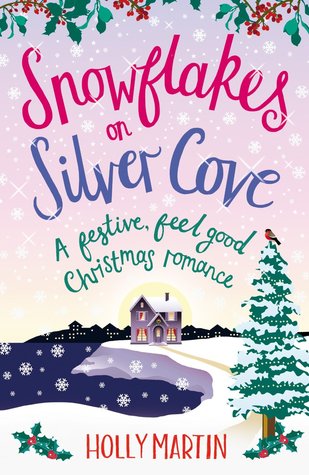 For the Holiday Adventure-a-thon I needed a book with “silver” in the title. I didn’t own anything that fit the prompt, so I went ahead and ordered myself a cosy Christmas-read!

Libby Joseph is famous for her romantic Christmas stories. Every December, readers devour her books of falling in love against the magical backdrop of the Christmas season. If only Libby believed in the magic herself…

Struggling to finish her current novel, Libby turns to her best friend and neighbour George Donaldson to cheer her up. But George also needs a bit of support himself. Nervous about getting back into the dating saddle after splitting from his wife, he and Libby strike a deal. She will teach George how to win over the ladies, and Libby will in turn be inspired to inject her novel with a good dose of romance.

As Libby and George explore the beautiful White Cliff Bay on a series of romantic Christmas-themed dates, Libby finds herself having more fun than she’s had in ages and…discovers feelings that she never knew she had for George.

But is it too late? Will George win someone else’s heart or can Libby act like the heroine in one of her stories and reach for her own love under the mistletoe this Christmas?

The one thing that I was most excited about was that our MC, Libby, is a writer. A genuine author. In some way I just looked forward to reading this book solely for that reason. I loved seeing her find inspiration in her own life – I just wish it was shown more during the story.

There were a whole lot more POV’s than I anticipated though. You don’t only get Libby and George’s story, but other members of the community also get to share a piece of their lives. If I’m honest, I even have to say that I enjoyed Amy’s POV most of all – quirky, loud and accident-prone equals fun!

That being said, this novel did have me laughing sometimes. If I’d have to say what kind of situations Holly Martin definitely has a knack for, it’s the funny ones!

But why do silences mean something different when we’re with different people? With you it’s never awkward, is it? It’s just silence. But with other people I feel the need to fill it withinane ramblings. What’s wrong with silence?

Let’s start by saying that 100 pages in, I still didn’t have a real Christmas-feeling. When I got near the halfway point of the book, I didn’t either. Honestly, even by the end of the book the same problem remained. So far for being a Christmas-read…

As far as the writing goes, I sometimes got the feeling that it dragged on. There was a good pace, but so many things happened. Too many things. I honestly believe that this book would be perfect to base a tv series on. Plenty of drama to go around! And this is exactly why I didn’t really enjoy Snowflakes on Silver Cove as I should have. It was over the top.

All the drama, combined with almost thirty-year-old characters acting like teenagers just made me want to pull my hair out at times. Some reactions and actions were so childish that I just… No.

He told me I was worthless and that no one would ever love me. There’s only so many times you can hear that before you start to believe it.

As for the munches, I’m going with some googled mince pies! I really need myself some ramekins so I can make things like this myself, haha.

And those seriously look so good! I couldn’t stop drooling when I googled them. Can someone please send me some? Like, now?!

I paid full-price for this book. All opinions are entirely my own. I’m not being compensated in any way.