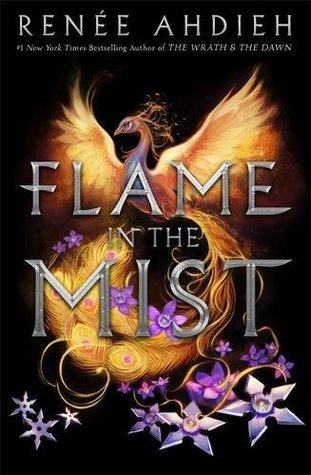 Months and months ago, Flame in the Mist was in my FairyLoot box. I don’t think I have to tell you how long I waited to read this book? Let alone how guilty I feel for waiting so long?!

It ticked all the boxes for me – interesting country, magic, retelling – yet I couldn’t seem to find the motivation to pick it up. Until I did!

The daughter of a prominent samurai, Mariko has long known her place—she may be an accomplished alchemist, whose cunning rivals that of her brother Kenshin, but because she is not a boy, her future has always been out of her hands. At just seventeen years old, Mariko is promised to Minamoto Raiden, the son of the emperor’s favorite consort—a political marriage that will elevate her family’s standing. But en route to the imperial city of Inako, Mariko narrowly escapes a bloody ambush by a dangerous gang of bandits known as the Black Clan, who she learns has been hired to kill her before she reaches the palace.

Dressed as a peasant boy, Mariko sets out to infiltrate the ranks of the Black Clan, determined to track down the person responsible for the target on her back. But she’s quickly captured and taken to the Black Clan’s secret hideout, where she meets their leader, the rebel ronin Takeda Ranmaru, and his second-in-command, his best friend Okami. Still believing her to be a boy, Ranmaru and Okami eventually warm to Mariko, impressed by her intellect and ingenuity. As Mariko gets closer to the Black Clan, she uncovers a dark history of secrets, of betrayal and murder, which will force her to question everything she’s ever known.

The writing is phenomenal, descriptive and beautiful. It pulled me in, didn’t let me go and made me crave more. I honestly hadn’t read anything by Renee Ahdieh before but now I really want to!
Before I know it, I finished Flame in the Mist and I really couldn’t believe it.

As for the characters, I liked Mariko. I liked her spirit, her courage and her overall tendency to just speak her mind. I honestly wouldn’t have the guts to do so if I’d fall in the hands of a clan with that murderous reputation…
Then we have Okami and Ranmaru. From the start I was so intrigued with Okami. I honestly can’t wait to read more about him. Same goes for Ranmaru – he has a certain air about him that I quite like. I want to know both their stories, completely! Let’s hope the sequel will give that to me.

The world-building was amazingly done as well. I could imagine everything – but the writing style also has a lot to do with that. However, I think it’s important to point out that the world-building didn’t drag on like it does in some books. It felt right and made me feel as if I might just go outside and stand exactly where Ahdieh was describing her characters to be.

As almost every book does, Flame in the Mist also had some twists and turns at the end. One of them I saw coming, the others I didn’t. Ahdieh also left the base for the sequel and… Well… Can I have it already? I can’t wait to indulge myself further in Mariko’s world!

Bravery did not come to her naturally. She spent too much time weighing her options to be brave. Too much time calculating the many paths before her.
But Mariko knew it was time to do more. Time to be more.

Not necessarily bad because I was so lost in the story that it didn’t bother me until I actually thought about it after finishing this book, but… the romance was weird! It just… happened? Sure, Mariko’s feelings were getting more obvious along the way but the other person’s? Not really… I think it could’ve used more growth, more insight in their relationship and maybe it should’ve waited until the next book.

“Without risk, life is far too predictable.”

As for the munches, I decided to go weird. There’s boiled eggs mentioned at some point? So… Here’s a whole lot of boiled eggs – which I used to make some appetizers, ha! They were quite delicious although my boyfriend cringed when I told him what I was going to do with it… He liked them anyway though! 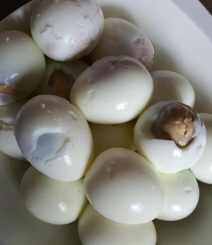 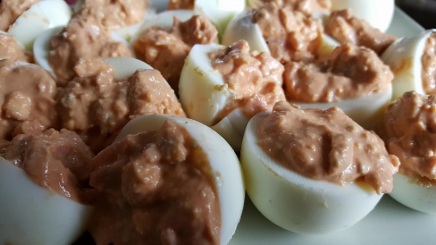 10 thoughts on “Review: Flame in the Mist by Renee Ahdieh”