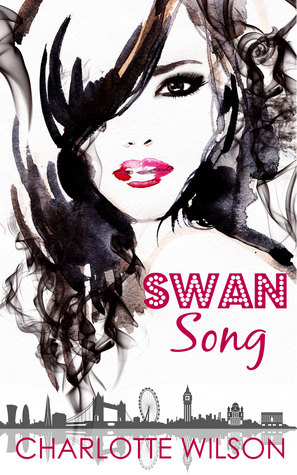 A while ago, Charlotte Wilson herself contacted me to see whether or not I’d be interested in her novel, Swan Song.

You guys might not know this, but when I was a teenager, I actually took dancing classes. No ballet, but still. Then, I discovered this novel is set in London. How could I say no?! I couldn’t.

LOVE AND LONGING IN THE BRIGHT LIGHTS OF LONDON

When iconic ballerina Beatrice Duvall died, a nation mourned – and a legacy was born. Sixteen years later, her daughter Ava comes to London to take part in a high-profile tribute to Beatrice, and to learn about the mother she never knew.

There’s just one snag: the tribute is a ballet, Swan Lake. Which is infinitely painful for Ava, because she can’t dance. Won’t dance. Not since she quit the Royal Ballet School last year and walked away from everything that defined her.

But this is London, colourful and crazy, and with actor Seb at her side, there’s so much to discover. Like Theatreland razzmatazz and rooftop picnics and flamingo parties. And a whole load of truths Ava never knew about her mother – and herself.

When the time comes to take the stage, will Ava step out of the shadow cast by her mother’s pedestal? And who will be waiting for her there, in the bright lights?

A coming-of-age novel about family and first love, in the city of hopes and dreams.

During the first chapter you’re immediately drawn in. The vibe that something’s off, that there’s a secret Ava doesn’t know about is so clear that you just want to find out what it is. It lures you in and even after you discovered what it is, you’re still intrigued.
Intrigued by Ava, intrigued by Seb. I liked both those characters. Although Ava’s struggle with dancing got on my nerves a bit, I did get where she was coming from and that made it alright to handle. As for Seb, he felt so genuine and was really easy to like!

I loved how Wilson painted London so vividly. I’ve been there a couple of times myself and found myself nodding at descriptions, imagining vistas I saw myself at some point. Not to mention giggle at the mention of the stairs at Covent Garden – I actually had to take the 193 steps up once because the elevators didn’t work…

And coming to London was never meant to be about escape: it was about confrontation. Getting over the hurdle of grief. Putting my past behind me once and for all.

I felt the writing to be a bit too detailed for my liking. A lot of gestures were described, gestures that felt to me like they were distracting from the story and conversations going on.

Not necessarily bad, but a little bit annoying is that this story was extremely predictable to me. I knew what was going to happen, I knew when it was going to happen and it kind of disappointed me that I was right about it all. But in the end, that’s really just personal.

Surely here, where that picture was taken, capturing that moment of love and pride – surely here I’ll feel something of her?

I received an eCopy of this novel through the author. All opinions are entirely my own. I’m not being compensated in any way.