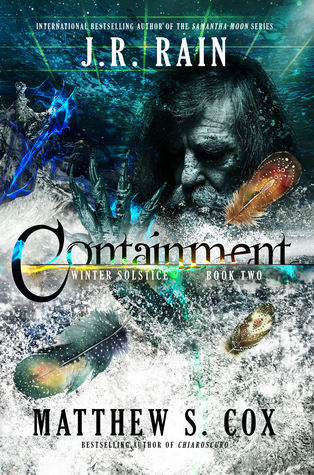 A couple of months back I read and reviewed the first novel of the Winter Solstice-series, Convergence. Thanks to one of the authors, Matthew S. Cox, I also got the chance to read the sequel, Containment!

Something big stirs in the murk of the Volga River, emerging at night to sow mayhem and death along the banks. Since Solstice Winters is already stranded at ground zero, she agrees to help, even though coping with giant lizards is far from her skill set as an intrepid reporter for a paranormal tabloid.

Yay for being the only elf in the world.

After narrowly escaping the Ordo Sanguinem Aeternam, she winds up sharing a flat halfway across the world from home with the enigmatic Cristiano, an agent of the secretive organization she may have obligated herself to join. He seems to know his way around the city, and he’s not bad on the eyes either.

Solstice soon realizes she’s tracking a beast the likes of which none of her father’s books have mentioned, a creature unique to Russia that her magic lacks the strength to kill. To make matters worse, the Federal Security Bureau sticks their noses into the mix.

While hunting the dangerous creature, she awakens a forgotten power in the depths of the river that has the potential to alter the course of human history―and not for the better.

I absolutely loved how Containment started. You didn’t have the regular recap you’d expect in a second installment. Instead you get your MC giving you a short, yet pretty funny recap of the events that occurred previously.

Then Mr. Moody popped back in! I’m ashamed to admit I completely forgot about this awesome cat but never again! Sorry, Mr. Moody! He seriously is so funny, punny and amazing. Honestly, I think he makes this novel even more awesome than it already is.

As for the writing, it’s simply what I expected of J.R. Rain and Matthew S. Cox. It’s fluent, everything happens in a fast pace – you simply don’t get time to get bored at at all.
And I’m going to give them a huge applause because I remember I had a little problem with the first installment – Convergence -, being the ending was way too abrupt for my liking. Maybe I simply expected it to happen again, maybe it actually is better: I don’t care. All I know is that the ending of Containment really didn’t feel that out of the blue as with the first book. Which really is a good thing since I got really annoyed with it last time, haha.

Pain is better than feeling nothing ever again.

It isn’t necessarily a bad thing, more a personal thing: it took me a while to get into the story. Pretty sure it was just me and my head being all over the place though! And I also think my brain just needs a bit of time to get used to their direct writing every time I read one of their books, haha.

As for the munches, let’s give that guy an actual cupcake! Honestly, I like this excuse to show off my cupcake because it’s been a while, haha!

Chocolate cupcake with mint frosting – the boyfriend wasn’t really happy with these since he doesn’t like that combination but I love it!

I received an eCopy of this book through one of the authors. This didn’t have any influence on my opinion. I’m not being compensated in any way.