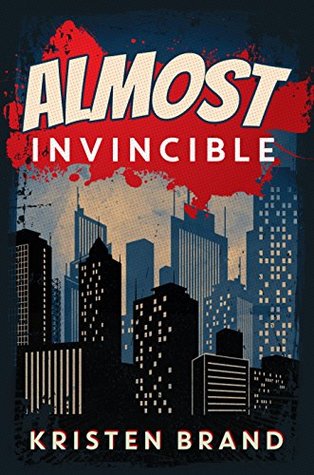 I finally picked up Almost Invincible by Kristen Brand, which is the prequel to her White Knight & Black Valentine Series. Books about supervillains and superheroes? Yes, please!

I have to admit this one had been on my Kindle for ages before I picked it up but… I did eventually?
Shame on me, I know…

A theme park turns into a death-trap of sadistic supervillains…

White Knight is the most popular superhero in the country—which is bad news for David Del Toro, formerly White Knight, who retired from heroics years ago and just wants some peace and quiet. When the White Knight ride at a superhero-inspired theme park has a grand reopening, Dave is more than happy to give his complimentary tickets to his daughter and her friends and spend the day at home. But then the park gets taken hostage by supervillains.

The man known as Bloodbath spent the last decade in a maximum-security prison and blames White Knight for putting him there. He’s given an ultimatum: the hero comes to face him, or he’ll kill every tourist in the park. Dave barely managed to beat Bloodbath while in his prime and doesn’t like his chances now that he’s old and busted. But unless he does something, every innocent person in the park is going to die…including his daughter.

The action! My god. Reading this short novel barely gave me any time to rest, never mind just getting myself a drink. The action-packed chapters didn’t stop! As soon as I thought about taking a little break, there it was again! Nope, I wasn’t allowed to eat, drink or go to the bathroom.

To say that Brand is amazing at writing fights is an understatement. I could easily see everything unfold before me, imagine the villains and heroes doing what’s written. My heart rate sped up while reading and I just didn’t want to stop!

If I had my way, the news cycle would be dedicated to the victims, not their killer.

Actual heroes and villains! I’m not one for comics, really. I sometimes pick up a superhero-movie but not all that often. That doesn’t mean I’m not intrigued by the whole concept though! When Kristen Brand contacted me to read this novel, I was interested immediately. I’m so, so happy that I decided to accept! Even though I was already drowning in author requests and probably shouldn’t have but hey.

I think I might just have to pick up the entire series? Eventually! Let’s just stick to my own TBR for a little while longer before I get behind again…

As for the munches, chicken wings, guys! I haven’t had those yet on my blog and couldn’t pass up the chance to buy myself a bunch and stuff my face with them.
Sorry not sorry.