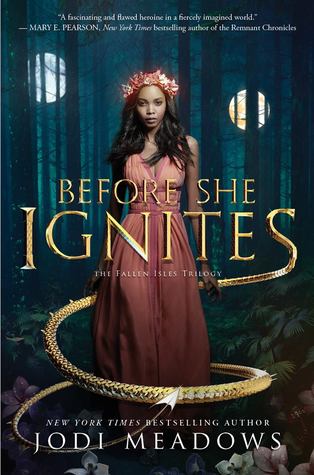 A while back, I won myself a copy of Before She Ignites with the Owl-crate cover. To say I was thrilled about that? Understatement! Who doesn’t like unique covers, right?

Mira Minkoba is the Hopebearer. Since the day she was born, she’s been told she’s special. Important. Perfect. She’s known across the Fallen Isles not just for her beauty, but for the Mira Treaty named after her, a peace agreement which united the seven islands against their enemies on the mainland.

But Mira has never felt as perfect as everyone says. She counts compulsively. She struggles with crippling anxiety. And she’s far too interested in dragons for a girl of her station.

Then Mira discovers an explosive secret that challenges everything she and the Treaty stand for. Betrayed by the very people she spent her life serving, Mira is sentenced to the Pit–the deadliest prison in the Fallen Isles. There, a cruel guard would do anything to discover the secret she would die to protect.

No longer beholden to those who betrayed her, Mira must learn to survive on her own and unearth the dark truths about the Fallen Isles–and herself–before her very world begins to collapse.

Let’s start with saying I read this book for Diverse December. Yes, it took me this long to finish my review… Sue me… Even though it’s a fantasy novel, our MC – Mira – suffers from panic attacks which translates itself in OCD-like counting. She can’t help counting everything. Steps she takes, the number of pillars, lights, tiles. Anything. Seeing diverse rep in fantasy is honestly something that’s so rare to me. I loved it!

Another thing I liked is the descriptive style of Meadows’ writing. I could easily imagine walking the halls and roaming the rooms Mira found herself in. Beautifully written!

This wasn’t fair. I was being punished for trying to do the right thing. I should have been rewarded.

But that honestly is the one thing I liked about the writing. The story flows – true – but the pace is just.. so.. slow.. I think I could pretty much summarize the entire 480 pages in ten sentences and you might not miss out on much? I feel like so much more could’ve happened. Not to mention the fact that multiple POV’s could’ve made the story much more interesting.

So, obviously, Mira’s the only POV you’re getting. Apart from the panic attacks and endless counting, she’s really a vain yet insecure girl. She thinks she only gets benefits because of her status and beauty. She doubts herself all the time.
But then, all of a sudden. Out of the blue, it’s like she completely changes? She comes up for herself, fights her own battles and suddenly actually uses her voice. Just like that. Even when she’s risking a whole lot more than just herself, which made her seem so selfish in my eyes. I instantly disliked her and didn’t really enjoy reading anymore…

Two cupcakes, because I honestly believe I will never reread this book nor will I pick up the sequel. The idea’s good but I just don’t like the way this book is written.

As for the munches, honeyed duck! As it happens, my boyfriend and I had honeyed duck on Christmas Eve as a starter and I was smart enough to take a picture of it, haha. It was my first time eating duck and it didn’t disappoint – although it wouldn’t be my top choice.

Have you ever eaten duck?
Read this book? Do you agree with what I said?

18 thoughts on “Why I won’t be reading the sequel: Before She Ignites by Jodi Meadows”