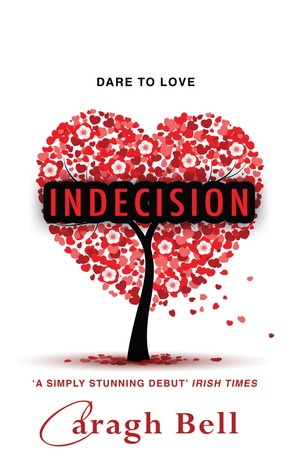 Through LibraryThing’s Early Reviewers Program, I got the chance to read Indecision by Caragh Bell. It sounded like a fun romantic read so I couldn’t not request it!

Glancing sideways, she was intrigued by his flawless profile. He had bronzed skin and a straight nose, with tousled blond hair that was effortlessly stylish. Lounging in his chair elegantly, he looked like the type of guy you could place anywhere and he would look at ease. He turned suddenly and caught her staring at him. Their eyes locked and suddenly she felt lost. They were the bluest eyes she had ever seen…

Lydia Kelly is in a good place. Determined to pursue her dream of being a writer, she enrols to do a Master’s degree in English. It means being separated from her handsome boyfriend Dominic, but it’s only a year, right? Then they can be together forever…

Life is simple until she meets Luca, a gorgeous blond American, who turns her life upside down. He causes her to question everything and suddenly she is forced to make difficult choices. Lydia has always played by the rules…until now…

The writing’s fluent and it reads like a train. When I just started reading, my phone showed me I had seven and a half hours of reading to go – which is pretty impressive knowing how fast I read so I figured it’d take me a while to finish Indecision.
How wrong I was! I finished it in a couple of days time. It simply read that easily and I was so immersed in the story I could barely put it aside anyway!

Girls get things done. If we say we’re going to do something, we do it.

Characters? Sorry, not sorry but the gay cousin wins! Colin’s so sweet trying to help everyone, sticking up for his family and friends whenever it’s needed. And the fact that he cooks? Well at that?! I need a friend like that. Only because I’m the one who has to do the dishes when the boyfriend cooks though.

When it comes to the two guys in the picture, Dom and Luca… I have to say Luca intrigued me from the start. Sorry, I just can’t help liking a typical bad boy? That and Dom sounded so… safe and regular, I guess? I immediately felt as if the relationship between Lyd and Dom was “just there” instead of exciting in any way. So, Luca! Even though he pretty much proves to be a brat, he makes the whole book more fun and intense.

He would become her friend and gain her confidence. And then make a move on her. Simple. He always got what he wanted.

Should I mention there are some steamy scenes? Probably should! At one point I was pretty much flapping my hands to cool off a bit because… whoop!  Pretty sure my boyfriend had no clue what was going on though – since he asked if it was “that suspenseful”. Yeah. Totally!

Lydia sometimes got on my nerves. I know that’ll happen with others when they read this story as well. Fact is she’s so naive and it shows in her actions, her decisions… In everything, really.
I was ready to throw my phone / Kindle aside at times.

All in all I honestly can’t wait to read the sequel and find out what more is going to happen in Lydia’s life!

As for the munches, there was a mention of linguine with a tomato sauce but… Well, since I got my boyfriend a pasta machine, he’s been experimenting with pasta a lot so here’s one of the dishes he made a little while back. Homemade tagliatelle with tuna, shrimp and a seafood broth. It was delicious, I tell you!