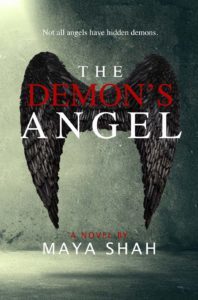 At the start of this month, Left Hand Publishers reached out to me and asked me if I’d be interested in reading one of their books. They had me at the title, to be honest! And I know I’m supposed to reject all requests, I know, but this sounded way too good to pass up, okay?

Neha was excited to enter her sophomore year in high school. That was until the boy she went out with sprouted wings, and Lucas, the man who raised her since she was a baby, turned into a demon.
Neha is far from human. She is an angel, the natural enemy of demons. An angel raised by a demon has never been heard of before, which makes some angels see her as a threat. Neha not only has to prove that she did not know anything about demons, she has to prove that she is on the angels’ side.

And she is. So she thinks.

But the angels are far from the benevolent ones she heard about. Especially their leader, who can’t wait to see her fail. As her search for answers only leads to more questions, Neha must rely on Daniel, a boy who believes aiding her will make up for the girl he couldn’t save, and his scarred sister, who is far less eager to help. Proving herself useful to the angels is almost impossible, especially because the information Neha has are things their leader would rather keep secret.

An angel raised by a demon, however, must be valuable in some way. Lucas thought so.

I loved the concept, the idea of this novel. I had a phase of reading anything angel-related – Patch anyone? – so it’s only natural that I wanted to be all nostalgic and pick this one up as well. As far as the idea goes, this novel didn’t disappoint!
Having an angel being brought up by a demon is definitely something that intrigued me throughout the whole novel. I kept wondering what influence this would have on Neha.

When it comes to the characters, I have to say that I liked Daniel and Liz, two angels, best. Daniel is the one finding Neha on earth and, obviously, he feels protective of her from the start. Not in an insta-love kind of way though! At least it didn’t feel like that to me. I like the way he tries finding his path between the ways he’s used to and the unusual circumstances Neha finds herself in.
As for Liz… That girl is bad-ass! She’s been humiliated in the past, yet finds a way back to being happy and fighting for what she wants and believes in. It’s admirable, really.

Because even a tiny pawn stuck in a corner on the board is capable of causing checkmate.

I couldn’t really connect with Neha. Okay, her guardian – Lucas – betrayed her, lied to her during her entire life but yet she’s more eager to believe the angels. The ones who abducted her to heaven, pretty much keep her prisoner and don’t do a thing to answer her questions. Those she believes while writing Lucas off completely.
At first, I understood. But after a while I just… How can she care so little about the person she lived with her entire life that she simply wants to fit in with the angels and barely looks back? And then all of a sudden she turns around, distrusting the angels. It just… Felt off?

Speaking of a sudden turn-around. Liz, a fellow angel, is pretty horrible to Neha at first. Then, poof, let’s be besties! No, just no. Things like that need to grow and I felt like it was lacking just that. Growth. Everything just appeared, happened, was without anything really building up to it. Not just Liz’ attitude, but also events in general, certain behavior that felt random to me.

It was like he and I were sharing a secret that I didn’t know about.

All in all it honestly was a pretty enjoyable read. Despite my remarks, I did fly through the novel and ended up liking it. I dare say Maya Shah is an author to keep an eye on. Every author grows and I feel like she can definitely get somewhere!

It’s possible the quotes used have been adapted in the finished copy of this novel.

10 thoughts on “Review: The Demon’s Angel by Maya Shah”