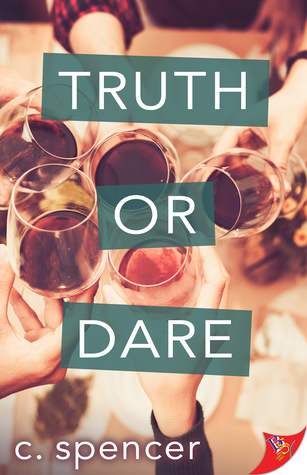 A little while back I made the decision of trying to focus a bit more on LGBTQIA. Being bisexual myself, I think it’s important to give those books a place on my blog as well. Sure, I’ve featured others, like Autoboyography, already but I’m going to try and share more unknown ones as well! Truth or Dare by C. Spencer being the first.

It’s a long weekend among six friends whose lives have intertwined through years of U-hauls and regrets, almosts and what-ifs. From the salt-sprinkled sidewalks downtown to outer bedroom communities, Mother Nature has its way of seducing even the most set in her ways to look at herself and others more closely.

So when that poorly timed snowstorm whirls into their New England town, it threatens to kick pent-up desires and tightly held secrets over the edge. This comes first for Jessie, who returns to her closest friend when her latest “relationship” ends in disaster – only to wind up further complicating matters. Except Hadley’s not about to be her next fling.

Sam and Ella Lasley are beyond content being years away from single, and a lot is banking on this weekend’s anniversary. But even as charming as Sam tries to be, months of planning might take a back burner to ingenuity if this snow keeps piling up – that is, if she can keep her wife’s mind off of work.

Ryan’s hoping three days off might help her reconnect with that out-of-her-league and much younger girlfriend, Brie. Still, faced with more turmoil than a late twenty-something can handle, Brie’s more engrossed in soul-searching and reminiscing. Those differences could be their demise, especially when Ryan makes an unexpected and heart-wrenching discovery of her own.

It’s hard to stand still amid a whirlwind of romance, anguish, and completely unexpected confessions. Still if everyone would just keep it together for the next few days, and if this snow would taper off, they just might pull off Sunday’s celebration. Drama-free.

I honestly love how all the main characters in this novel are women. Gay women. It felt so refreshing to read a novel like this compared to all the books where there are mainly straight characters!

Jessie immediately got my attention though, since it’s clear from the start she’s the tomboy of the bunch and.. well.. No hard feelings, but those are the kind of women I like best myself, ha!

The writing had a sassy, sarcastic undertone throughout the entire novel. I enjoyed it but…

Perhaps sometimes we need to pull apart so we can draw right back together, understand the why and the how and the who we are.

Unfortunately, that backfired a bit as well. There were six different points of view, six different women sharing their thoughts with us. At times, though, it didn’t feel like that. I noticed how I sometimes couldn’t figure out who’s head I was in at that point since they all sounded the same. Apart from Jessie, they didn’t feel unique, not having their own distinct voices. At one point it simply felt like one blur of characters and I couldn’t figure out who was who if I didn’t really remembered myself of who’s POV I was reading.

Not to mention the fact that they’re supposed to be… what? Forty year olds and they’re behaving like teenagers at times? It felt wrong and… definitely weird.

I’ll exist without her because I don’t exist to her.

The novel read quite fluently but after a while it started bothering me how detailed the descriptions were. Once I noticed it, I seriously couldn’t un-notice it and that made reading a lot less fun. I really don’t want to know you paid with your credit card before putting it back in your wallet and shoving it in your back pocket.

When I finished reading I also felt like the entire story pretty much revolved mainly around Jessie and Hadley. The other four POV’s? I honestly don’t think I would’ve missed much if they weren’t present..

Overall it was an okay, decent read but there were definitely some issues.

As for the munches, I decided to get baking again! Chocolate biscotti, anyone? They were a bit dry, so I ended up dipping them in milk – pretty sure I’m not supposed to do that but hey… They were delicious though! The almonds definitely made a difference.

Do you know of any LGBTQIA-books that should get more attention? Feel free to let me know so I can check them out!

8 thoughts on “Review: Truth or Dare by C. Spencer”