As a Potterhead, I’ve been wanting to share this cafe for a while now but simply never got around to it. When I heard they had some renovations done and I found myself drooling over them, I decided it was now or never: Time to give you guys a small tour and make sure this is on your radars!

Just looking at the door makes me want to head there right now, to be honest. You just know, right from the bat, that this is the place to be if you’re any kind of geek. Automatically you feel like you want to head in and see what the interior looks like.

Because Jeroen is awesome – and seriously one of the most friendliest bartenders I know – I get to share some pictures of the inside!

Fun addition: Jeroen is simply portrayed on his own front door! Talk about geekiness all the way, right?

Oh, and the second pair of doors is definitely worth opening, I reckon? Are there any Whovians in the building?!

When you’re inside, the first thing you see is a whole lot of Harry Potter!

Which, of course, we all simply love because we’re bookworms and proud of it. And if you haven’t read Harry Potter yet, I really do hope you will eventually! If you’re not planning on it.. Well, maybe Comic Sans has other geeky stuff you’ll want to see with your own eyes?!

We even have our own small Platform 9 3/4 in Ghent now! This is one of the new features and it’s pretty obvious that I simply love, love, love it.

Who needs to go to London if you can simply admire it in Ghent as well?!

Giant time-turner, anyone?
Or do you prefer The Monster Book of Monsters?

That’s the Harry Potter-corner for you! But that’s not all. Noooo!
There’s so much more to Comic Sans than that. Pinball machines: check! Gameroom: check! All the wall gorgeous wall decorations: check!

And if that hasn’t convinced you to check this place out someday, you might be interested in themed parties! Of course, Harry Potter-themed parties are a must, but apart from that there are other themes as well: Cosplay, [metal] karaoke, Game of Thrones, Star Wars, Disney, quizes… You name it! And for the gamers out there, yes, there are also release parties and tournaments!

Not to mention the fact that famous people apparently tend to visit Comic Sans during the days FACTS is going on, which is an awesome convention definitely worth checking out for all geeks! Jared Gilmore visited back in October.. Once Upon a Time, anyone?

Even though this isn’t a review, I’m still adding my typical… drink! Because Comic Sans definitely has some delicious cocktails – superhero-themed?! Oh, and they also have butterbeer, just saying. Just saying.

If you’re ever in Belgium or you feel like you needed an excuse to head to Belgium – chocolate, beer and fries are a good motivation but this one is even better, right? – this is it! And if you do, let me know!

Important note: I really feel like mentioning that if you decide to visit Comic Sans, mind the fact that it’s an actual cafe, not an exhibition or museum. Show some respect for the awesome people tending the bar, owning the cafe, and don’t just head in to snap pictures. Their drinks are seriously worth a visit anyway.

Although this post is more about sharing a place I believe is worth visiting, I’m still adding my review-like munches! I went back especially for you guys – no, I just used this as an excuse really – to get some pictures of their drinks. Their Superman, Tattooine Sunset and Butterbeer! 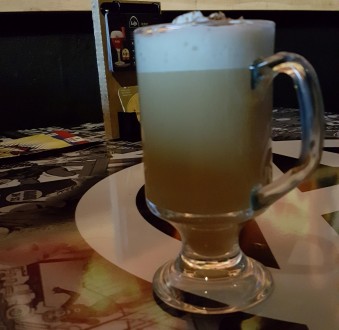 What do you think? Feel like taking a trip to Belgium?
Do you have any places like this where you live?

All pictures, except for the drinks, belong to Jeroen Baert, owner of Comic Sans, who gave me permission to use them in this post.

20 thoughts on “COMIC SANS: Potterheads, gamers AND movie-fanatics will feel at home here!”