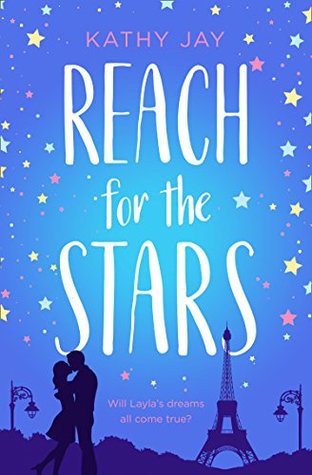 Slowly, very slowly, I’m making work of my eARC-TBR. Reach for the Stars was also on that list so, naturally, I’m sharing my review with you!

I have to admit that it’s a difficult one. Although I liked it, I also had some issues with it which makes this such a hard book to review. Let alone rate…

From heartbreak to the best mistake they’ll ever make…

When Layla Rivers’ boyfriend of 12 years skips out on their round-the-world trip of a lifetime – without her – she does what experience has taught her to do best, hide away in the cosy Cornish village she calls home. But any hopes of laying low soon disappear when Hollywood’s hottest star & mutual acquaintance, the gorgeous Nick Wells, crash lands on her couch…naked!

For Nick, Cornwall is supposed to be an escape from both his problems and the limelight, yet as the stars align and disarming Layla bursts into his world, his life only gets more complicated.

Will Nick and Layla fight against the undeniable connection between them or, under the warmth of the Cornish sun, will they follow their hearts’ desires?

The thing with romances / chicklits like these, is that they’re pretty much always light, quick reads. That’s the case with this one as well. I enjoyed it, I flew through it but I didn’t feel like it was special.. At all.. And I hate that.

So, yes.. my issues.. I really loathe it whenever this happens but we gotta do what we gotta do, right?

First off, I felt the characters fell flat, didn’t feel unique. This story’s written from two POV’s – Nick’s and Layla’s – and you honestly cannot tell the difference between the two until it’s made obvious. They simply sound the same, fell flat, didn’t feel unique in their beings. They just were; went through the motions the author wanted them to go through and that’s it.

Lack of growth is also one I’d like to point out. Sure, Layla and Nick have changed by the end of the novel but there was no point, no point at all, where you could tell they were evolving. They simply just ended up being evolved, out of the blue? If that makes any sense. First they’re at a certain spot in their lives, than they’re in another. Done. No evolving, no way to actually see them change and grow. This is so hard to explain so I hope you guys get what I’m trying to say here…

One thing that also was a bit annoying to me, is that there were a lot of steamy scenes. You guys know I like my fair bit of romance, but this one was just over the top. I felt like the focus was more on those scenes than on the actual story to be honest. That is, until the end of the book, which was… okay-ish? But felt weird and off. Seemed to me like there were some fun scenes left out that could’ve made the ending more.

Three cupcakes! Sure, I had some issues with it, but it was still enjoyable enough and giving less feels wrong? Oh, the hassle of reviewing…

For the munches, I was going to go with some crème brûlée, but my boyfriend pretty much detests anything pudding-like so that wasn’t really an option. Which is why I used this as the perfect excuse to go and buy myself some macarons!
Caramel, lemon and raspberry. All three of them were ridiculously delicious. I thought the raspberry was going to be my favorite but it ended up being the caramel one.

Have you tried macaroons?
What’s your favorite flavor?

6 thoughts on “Review: Reach for the Stars by Kathy Jay”