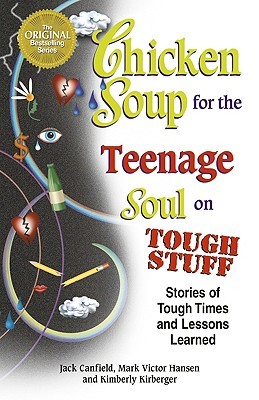 Since I started joining a monthly Book Battle on Facebook, I also have to keep in mind those challenges when reading some books. In this case, I needed a novel of short stories. Since I haven’t read the Grisha-trilogy yet, I didn’t want to pick up Language of Thorns so decided to ask around a bit.

This is how I stumbled on the Chicken Soup-books and how glad I am about that.

“This latest offering in the best-selling “Chicken Soup for the Teenage Soul “series explores a host of challenges faced by today’s teens. Within its pages teens will find portraits of life’s complexities expressed from the viewpoint of their peers. Teen contributors share their thoughts and feelings on difficult issues, ranging from poor self-image to thoughts of suicide, from family discord to coping with the loss, from peer pressure to school violence. Teens ranked stress as one of their top concerns (along with child abuse and STDs). Oftentimes, the pressure can feel overwhelming, whether they involve worrying about an upcoming test, competition sports, family responsibilities, dating, or more extreme issues such as depression, suicide and school violence. The first three volumes of the “Teenage Soul “series and the companion journal illustrate the ongoing popularity of this series (unit sales exceed 11 million). “Chicken Soup for the Teenage Soul on Tough Stuff “and the Spring 2001 release “Teenage Soul Letters “will undoubtedly follow suit as the next best-sellers in a phenomenally popular series.”

Honestly, I knew what I was starting when I picked up this book and it still overwhelmed me in the best way possible. So many things in Chicken Soup for the Teenage Soul on Tough Stuff sounded familiar, hit a chord and made me feel.
I’m even going as far as admitting that over 30 of the stories and poems had me tearing up or full-out crying and that’s saying something. You’d think that a story of barely four pages can’t get under your skin like that but, trust me, they can. Easily.

This book consists of different themes that are tackled one by one, some of them being drugs and alcohol, abuse, family matters and death. I can’t say there was even one chapter where nothing felt familiar or hit me hard because there always was at least one. Some poems will stick with me for a long time. Some stories will probably be reread a couple of times in the future too.

I loved how this novel consists of stories told by the people who actually lived them. You can feel the honesty they’ve written it down with, the feelings they poured into their words. With all the different stories, you just know that they’re all feel unique too and I loved that.

The fact that several – very confronting – stories and poems have editor’s notes that mention what organizations to contact should you be coping with any of the hard topics – like abuse, drugs and suicidal thoughts – made it all even better.

In saying that, though, there was one thing that I did have a problem with and that’s the simple fact that you don’t always know what’s going to be said in a story, what it’s going to be about. For someone who stays clear of certain triggers, this might be a problem because you don’t always figure it out until it’s too late. Sure, the themes give you some clue of the subject, but it’s not always very clear. Or there are actually two themes going on and the second one sneaks up on you.
It didn’t bother me exactly, but I know that there are people who would definitely not cope with certain of these stories and they wouldn’t be warned up front.

Have you ever read a Chicken Soup-book? What did you think?
And if you haven’t, are you going to?

11 thoughts on “Review: Chicken Soup for the Teenage Soul on Tough Stuff”