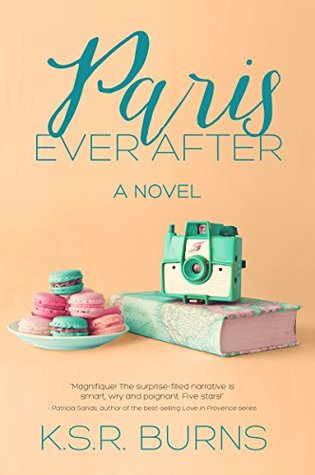 SYNOPSIS
“Can Amy’s rocky start in Paris turn into a happy ever after?

Amy didn’t realize how stale her life was until she jetted off to Paris without telling a soul—not even her husband—and had the adventure of a lifetime. Now as she tries to establish herself in the City of Light, she finds that despite a fun (and quirky) group of friends and the ability to indulge in French pastries whenever she wants, reinventing her life is much harder than she imagined.

Then on Amy’s thirtieth birthday, two unexpected visitors leave her wondering if she will soon be saying au revoir to Paris and the new life she’s struggled to build. Her estranged husband, Will, shows up—but is he interested in reconciliation or separation? And a young woman who arrives on Amy’s doorstep unleashes chaos that could push Amy out into the street.

As Amy’s Parisian dream starts to fall apart, she must decide: return to the stability of Will and Phoenix (if that’s even still an option) or forge her way forward in Paris? Amid secrets and surprises, set in enchanting gardens, cozy cafés, and glittering Parisian streets, Amy must choose between two very different worlds. And each has a claim on her heart.”

You know me by now. I’m a sucker for love stories set in London or Paris – one the city I love, the other the city of love. The reason for picking up Paris Ever After was no different. The title and the cover drew me in and wouldn’t let me go!

First I have to mention that I didn’t know this was the second book in a series so I haven’t read the first book, The Paris Effect. Looking back on my reading experience of Paris Ever After, that’s a good thing because I certainly wouldn’t have read this novel otherwise. [Adding that you don’t need to read the first novel before diving into this one.]
I do want to say that I am still intrigued by the concept, by the idea for this story. I just believe it could’ve been executed better.

Can you see where this is going? I struggled writing this review because I really don’t want to bash the author at all but Paris Ever After simply wasn’t my cup of tea at all.

The entire story felt very repetitive when it comes to our MC’s – Amy’s – past. I felt like it was said over and over again how it came to be she’s living in Paris. The overall story line was welcome, sure, but at one point it became ridiculous to have the reconfirmation of what had happened over and over again.

Talking about Amy… She got on my nerves quite a lot. She’s supposed to be 30, yet she’s very egocentric and judge-y. She has this tendency of whining and being ridiculously naive to the point of me wanting to bash my head against a wall.
You can easily have a character you don’t like, but this time it totally ruined my reading experience at times and that’s just… wrong. I couldn’t connect with her at all and it’s something I felt is needed when it comes to romance novels like this one. You want to be able to understand their actions, reactions and thoughts but I didn’t.

I said earlier that the setting of a novel in Paris or London is often something that convinces me to pick it up. Usually when romance novels like this one are set in Paris, you can feel the Parisian magic ooze out of the story but in this case? The opposite was true. I didn’t lose myself to its magic at all. Some descriptions almost pulled it off but they didn’t enthrall me as I expected them to.

Apart from that I also got annoyed by all the translations from French to English. I completely realize and accept that’s due to my knowledge of French which made the translations absolutely unnecessary but I still couldn’t help but get annoyed by it. Every French word was translated one way or another and it took away from my enjoyment. Again, I realize this is subjective and is totally my own fault.

Then we have the ending of this novel. Everything felt way too convenient for my liking. Orchestrated, easy and unrealistic are the words to describe my thoughts about the entire novel when I finished reading. I saw every twist and turn coming – even the ones who shouldn’t have been overly obvious. I can’t remember reading any clear foreshadowing, but I wouldn’t be surprised if there was, really.

It’s been a while since I gave a low rating like this and I hope it won’t happen again soon. I always feel awful about writing reviews like this, but I’m here to give my own opinion on books so that’s what I’m doing.

One good thing is that I got the excuse to buy myself some madeleines. I wanted to make them myself first, but since I need the right trays for those… Store-bought madeleines it is! They’re delicious although I can imagine homemade ones being way more delicious.

If you think your  opinions would differ from mine, it’s releasing tomorrow, on May 1st. Do let me know how you feel about it once you’ve read it! I’d love to hear someone else’s thoughts on it!

How do you feel about writing negative reviews? Do you struggle with them or are they as easy to write as any other review?

9 thoughts on “Review: Paris Ever After”