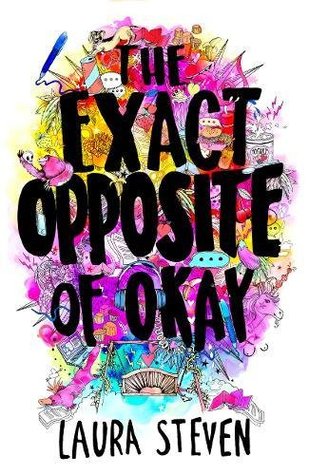 TITLE: The Exact Opposite of Okay
AUTHOR: Laura Steven

SYNOPSIS
Izzy O’Neill is an aspiring comic, an impoverished orphan, and a Slut Extraordinaire. Or at least, that’s what the malicious website flying round the school says. Izzy can try all she wants to laugh it off – after all, her sex life, her terms – but when pictures emerge of her doing the dirty with a politician’s son, her life suddenly becomes the centre of a national scandal. Izzy’s never been ashamed of herself before, and she’s not going to start now. But keeping her head up will take everything she has…

I’ve been wanting to read this novel ever since I heard about it. Even reviews saying “they couldn’t connect with the main character because she was way too straight-forward and sarcastic ” didn’t stop me at all. Why?

Well, maybe because I’m way too straight-foward and sarcastic and not ashamed of it. That might be why.. I’m not sure though. What do you think?

Izzy is everything I expected her to be. Sarcasm everywhere and her sense of humor is so perfectly the same as mine. I couldn’t help but fall in love with that girl. Not only that, but she actually evolves throughout the story. She struggles with herself, her friends, her future, everything and still battles on. She isn’t giving up, not at all. She wants to solve her own problems, in her own way and that’s something I admire.

“I wonder whether I’ll ever stop feeling dirty.”

Izzy is raised by her grandmother, Betty. Since all my grandparents passed away by now, it was both emotional and heart-lifting to see the bond between those two. I can’t compare it to any bond I have with anyone. It just felt so pure, real and genuine. Straight-forward and yet flawed. I loved it.
Then we have her two best friends, Ajita and Danny. I don’t think anyone could find a better best friend than Ajita. That girl is perfect in every single way. She supports Izzy, even though she has her own issues. While going through rough patches, they’re still there for each other or try their best to be. That’s what a friendship is all about.
As for Danny. Honestly, I don’t like him one bit. He feels like he’s entitled to anything he wants because he is Danny. He thinks he can buy what he wants, doesn’t matter what it is. Honestly, he’s a classic example of a dick – excuse my language. Even so, this added another dimension and hard topic to this book.

“Why is his life worth more than mine, just because he’s rich and male?”

Then we have one teacher who stood out enormously: Miss Crannon, Izzy’s drama teacher. She’s what I envision the best teachers out there being like. What I hope most teachers are like. Supportive, invested in their students’ futures and abilities, trying their hardest to help them achieve their goals – even when they’re unlikely and maybe hard to reach. Honestly, teenagers can never have too big of a support system and Miss Crannon proved that.

“But you can love a thing without necessarily dedicating your life to it, you know?”

In saying that, there are tons of topics mentioned – all of them important and relevant in this day and age. The importance of a support system, feminism, self-respect and self-image, objectification, sexuality, friendship, intimidation and victim-blaming. Those are all things mentioned in this novel one way or another. Being able to pull that off in a way that doesn’t feel like an overload? Pure brilliance.

“It’s like when I talk about racism, I’m not asking for one single white person to wave their magic privilege wand and fix one single symptom. What I’m saying is that I want the systemic racism to not exist in the first place. I want a cure, not a Band-Aid.”

As for the writing? Let’s just say I laughed my butt off with Izzy’s commentary [between square brackets]. I was already laughing out loud before I’d read the first chapter and that’s saying something. I loved how Izzy’s voice sustained the constant flow of sarcasm and jokes, how she stayed true to herself while still showing the evolution she was going through.
I tried finding something, anything to fault when it comes to The Exact Opposite of Okay, not because I wanted to find something “wrong” with it, but because I wanted to make sure for myself that it’s everything I’m writing down here. I couldn’t find one bad thing. I just couldn’t. I loved every word.

“But sadness is not a get-out-of-jail-free card. It doesn’t allow you to treat the people around you like human punch-bags. Like they exist solely to make you happy again.”

If you haven’t read this novel yet, you really should. You rarely come across those perfect books that tackle so many important issues, combine that with perfectly fleshed-out and faulted characters [which, admit it, is extremely important to have] and of which the writing is just superb.

As for the munches, I made spaghetti with meatballs and had a Capri-Sun with it! I will never be able to resist a pasta-dish mentioned in a book. Never, ever. The day that happens, you just call the doctor on me because there’ll be something very, very wrong with me. I’m not even joking.

Oh, and maybe I should mention there’ll be a sequel?! I AM SO HERE FOR THAT. PLEASE GIVE IT TO ME NOW. Like… Seriously. I need it now. I pretty much needed it a month ago? I just cannot wait!

Maybe I should also mention that I actually got to meet Laura Steven at Yalfest BE on April 20th. Got my book signed, tried not to freak out and… well.. ended up freaking out as soon as I left the building – I needed to vent and let it all out, okay? I may have burst into tears too as soon as I got into the car. Maybe. Seriously though, she’s lovely! If you ever get the chance to go and meet her, do it! You won’t regret it at all!

Do you have an addiction like I have my pasta-addiction?
Do you know any other books tackling so many important topics at once?
Have you read this book? What did you think?

21 thoughts on “The Exact Opposite of Okay might just be PERFECT.”