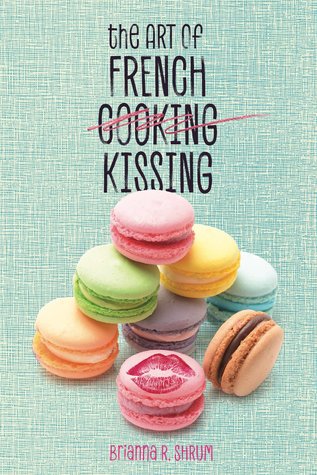 SYNOPSIS
Seventeen-year-old Carter Lane has wanted to be a chef since she was old enough to ignore her mom’s warnings to stay away from the hot stove. And now she has the chance of a lifetime: a prestigious scholarship competition in Savannah, where students compete all summer in Chopped style challenges for a full-ride to one of the best culinary schools in the country. The only impossible challenge ingredient in her basket: Reid Yamada.

After Reid, her cute but unbearably cocky opponent, goes out of his way to screw her over on day one, Carter vows revenge, and soon they’re involved in a full-fledged culinary war. Just as the tension between them reaches its boiling point, Carter and Reid are forced to work together if they want to win, and Carter begins to wonder if Reid’s constant presence in her brain is about more than rivalry. And if maybe her desire to smack his mouth doesn’t necessarily cancel out her desire to kiss it.

If you know my blog, you know I also love my food, my munches. Seeing the blurb of this novel, I pretty much jumped at it. I needed it, craved it, wanted to devour it right that second. Why would I not want to read a story set during a cooking competition?

So, of course, one of the biggest “good” things about this novel was exactly that. The cooking competition. I kept my fingers, toes and eyes crossed for the competition not to fade into the background – Hi, When Dimple Met Rishi – so the entire story could revolve around love. It didn’t and I freaking loved it for that.

All the munches mentioned! I honestly got hungry while reading pretty often. I even have a list of munches. An actual LIST of things I want to try out someday. Having my blog, I always keep my eye out for food mentioned in books, but this one topped them all. With the cooking competition, food is everywhere. I honestly didn’t know I needed a book like this in my life until I read this one. [My boyfriend and I’s addiction to cooking shows – hi, Masterchef – is probably a good indication though..]

I don’t remember the last time I let things just happen. Because my brain is mapping out all the reasons it won’t and how to prepare for those eventualities, which sometimes feel more like certainties.

Apart from that, another huge thing: there’s a queer character! There are both Japanese and Indian characters! There’s diversity! I love it; absolutely love it! Although I would’ve loved it even more if the queerness would’ve been shown just that tad more – but that’s simply me being “SLAM THE QUEERNESS IN MY FACE”, really.

When it comes to the characters and their relationship, I really have to say I loved it all. I could see their chemistry and enjoyed their banter. It can’t be easy to juggle a competition that might change your future with your attraction towards one of your biggest competitors  and that was portrayed really well, in my opinion.

The writing style is unique, to say the least. Written in first person and the present tense, you’re right into the main character’s – Carter’s – head. I had some trouble with it since there tend to be some ridiculously long sentences. Not to mention the.. actual writing reflecting how our thoughts can go at times. Repeating certain words, sentences, being a rambling mess. I can understand why, but I simply didn’t like reading something written like that? Totally personal.

Because the thing is, once you want one impossible thing, it’s very hard not to want two or three or a thousand, and now I want all these big, impossible things at once.

I also feel like the characters could’ve been a bit more fleshed out. They fell somewhat flat for me; I would’ve loved more evolution in their characters but I guess this novel was a bit too food- and love-focused for that?

I have to say I really enjoyed this book though. It was the first cooking competition book I read and I really hope it won’t be the last. I loved the focus on the competition, loved how the relationship of Carter and Reid progressed, but in the end… I also had some issues with it, so 3,5 cupcakes it is!

There was simply so many food in this novel. I didn’t even know where to start. The baked Alaska sounded good, but… I don’t think I’m quite ready to try and create something like that just yet.
So I decided to wait a couple of weeks and see whether one of the highlighted munches would suddenly turn into a craving and… Guess what? It did! Blueberry muffins, guys! I had never made those before!

Do you know any other books with cooking competitions in them? Would you like a book like that? Any of you also addicted to Masterchef like I am?

All quotes were taken from an unfinished copy and might differ from the finished one.

2 thoughts on “COOKING COMPETITION in a book: YES PLEASE – The Art of French Kissing by Brianna R. Shrum”