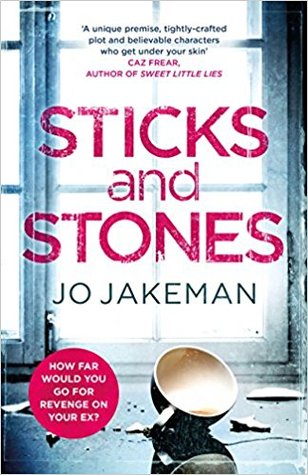 SYNOPSIS
How far would you go for revenge on your ex?

Imogen’s husband is a bad man. His ex-wife and his new mistress might have different perspectives but Imogen thinks she knows the truth. And now he’s given her an ultimatum: get out of the family home in the next fortnight or I’ll fight you for custody of our son.

In a moment of madness, Imogen does something unthinkable. Something that puts her in control. But how far will she go to protect her son and punish her husband? And what will happen when his ex and his girlfriend get tangled up in her plans?

When you’re living with mental abuse, most of the time there’s only two ways go. Either you slowly destroy yourself, letting yourself become what the other wants you to be or you stand up and fight for the things you want to protect, for yourself, your life. Imogen succeeded at escaping the mental abuse. Or so she thinks. Because, can you really, truly get rid of it as long as the abuser is still a part of your life?

Right at the bat, you’re pulled in and your curiosity is sparked. Sticks and Stones begins with the funeral of Phillip – Imogen’s ex-husband – and then jumps back twenty-two days in the past. Of course you can’t help but feel the need to figure out what happened! Curiosity is in my bones so I was infected pretty badly and read this novel in no time at all. Even though you already know how it ends, you can’t help but want to figure out the how, when and why. Throughout the entire novel you’re guessing and guessing some more!

“Most people were scared of death. I was afraid of life.”

This story truly was a roller coaster ride when it came to my feelings towards the characters as well. One moment I liked Imogen, understood why she was behaving in a certain way. The next, I was completely ready to throw her under a bus. The same could be said for Phillip, really. I kept going from understanding their actions to loathing them to screaming at them to understanding them to pitying them and then go back to understanding them. It felt like an endless loop!

When it comes to Imogen, I definitely connected with her a lot. Having lived with someone mentally abusing me, some things felt very familiar. At times I struggled while reading because it was confronting in a way I had prepared myself for, but it still got to me. This made me appreciate Sticks and Stones more though.
It also showed me, once again, how anyone can be driven to do the unthinkable when you’re pushed to your limits over and over again. It showed how love can make you do things and accept things you normally wouldn’t.

“I had enough reasons to walk away, and only one to stay: I hadn’t believed I deserved better.”

Apart from Imogen’s POV, we also get the occasional POV from a different character. This is much needed since it gives us more of a background, makes us understand events and decisions on a level we wouldn’t have otherwise. Or you completely rethink what you thought had happened and confuses the hell out of you even more because what did happen?!

One thing that got on my nerves was how many times the characters in this novel drank alcohol. In some cases it was relevant to mention, it was “normal” – as far as consuming alcohol can be seen as normal to cope – but other times… Well, not so much. Honestly, that’s very personal since I don’t cope well with over-mentioning alcohol consumption since my dad’s an alcoholic.

This is a novel that made my heart race, stutter, stop and almost fail on me because I was so engrossed, so “entrapped” in the story I could hardly get out. If you want to read a novel that’s bound to intrigue you from the start, leaves you guessing and changing your mind at every twist and turn, this is the one for you.

Is there a specific book or scene that actually made your heart beat faster?
Tell me all about it!

6 thoughts on “Review: Sticks and Stones”