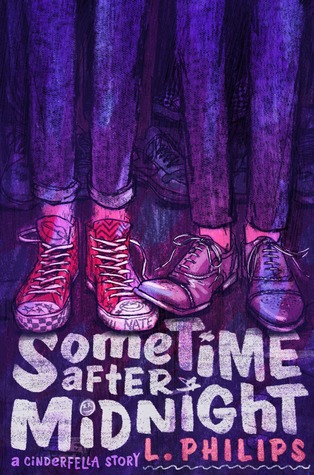 SYNOPSIS
Late one night in a dingy Los Angeles club, Nate and Cameron meet and discover they have much more in common than their love of an obscure indie band. But when Nate learns that Cameron is the heir to a soul-sucking record label–the very one that destroyed his father’s life–he runs away as fast as he can. The only evidence of their brief but intense connection is the blurry photo Cameron snaps of Nate’s Sharpied Chuck Taylors.

When Cameron’s sister Tess–a famous model and socialite–posts the photo on Instagram for her legions of fans, the internet just about breaks with the news of this modern fairy tale. “Anyone know the owner of these shoes?” she writes. “My Prince Charming brother is looking for his Cinderfella!” But while the viral sensation begins to bring the pair back together, their own demons and pasts might get in the way of any happily ever afters . . .

I have to admit – I’m seriously late with this review and reading this story. I had some issues with the format – couldn’t get the ARC on my Kindle, then it wouldn’t open on my computer anymore and.. well.. Let’s just say I was so intrigued by the synopsis that I ended up buying a finished copy instead! I couldn’t say no to something that sounded like a Cinderella-retelling, but contemporary and with LGBTQIA+ characters. I just couldn’t. Was it worth it? Wasn’t it? Only one way to find out, folks!

It’s hard to figure out where to start my review on this one because there are so many things I liked about it. I read this book of nearly 400 pages in barely two days. I couldn’t stop reading. I even let my boyfriend drive my car so I could read in the meantime and that’s saying something, haha. The story simply flowed and I loved that.

Then we have our two main characters, Nate and Cameron. Sometime After Midnight is written from both their perspectives and that adds so much to the story.
We see how Nate struggles with losing his father, how that impacts his views, principles and overall character. He’s still grieving and dealing with everything. I really believe it’s portrayed well.
As for Cameron, he isn’t the snobbish rich kid I expected him to be. He’s quite grown-up and knows what he wants. Although, I have to admit, there are some moments where he goes spoiled and rich all the way but when you’ve grown up like that.. I guess it’s hard not to act like it sometimes as well.
Overall I simply liked how their relationship came to be, grew and how they found their spots in life.

Of course I have to mention the LGBTQIA+ factor in this story. Especially since Cameron’s a celebrity and his sexuality is simply accepted. Same goes for Nate. There’s no homophobia whatsoever in this story which might make it a bit unrealistic since it’s celebrities we’re talking about but.. Let’s just say it gave me hope for a better world than the one we live in today!

I also adored the musical aspect of this story. The author’s musical knowledge really came forward and even made me look up some of the artists mentioned because why not?!

I did miss a couple of things in this story though. Overall I liked the characters, but they still felt flat to me as well. I loved the story, but I simply wasn’t really interested in getting to know our characters better than I did? I just wanted to know how the story went – if you get what I mean.

Another thing I only thought of a couple of days after finishing this book is how the characters actually had it.. pretty easy at the end of the story? Maybe throughout the entire story, in a way. Some things got wrapped up very easily, things I expected more of a struggle with. Maybe that would’ve made the ending more heart-felt.

Even though there are some things I didn’t like, I did absolutely love reading this story. I flew through it. It’s a cute, fluffy and light gay romance – which I was simply so in the mood for anyway! Definitely makes me go easy on the rating this time, haha.

What do you think of the cover? That’s what grabbed my interest to start with!
Would you read this? Why / Why not?