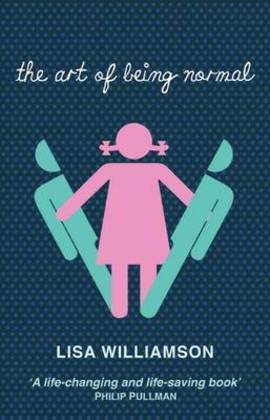 TITLE: The Art of Being Normal
AUTHOR: Lisa Williamson

David longs to be a girl.

Leo wants to be invisible.

When Leo stands up for David in a fight, an unlikely friendship forms. But things are about to get messy. Because at Eden Park School secrets have a funny habit of not staying secret for long…

Seeing the cover of this book, I immediately knew I was going to love it. I just had to love it – there was no way I would have it disappoint me. So, what I’m basically saying is that this book had a whole lot to live up to without me having read the blurb at that point. I couldn’t imagine a story with transgender rep being anything but amazing and I was right! Or, at least I was until I’d finished the book and decided to read some own-voice reviews… – I do want to add that I don’t identify as trans so this is NOT an own-voice review. –

I wrote “The Good”-part of my review before reading other reviews, own voices-reviews. That’s the sole reason I’m still going to stick with everything I wrote first in this part. Beware of “The Bad”, though. There’s a whole lot coming your way over there.

I flew through this book. Whether it’s the content, the plot, the story line or the writing – I don’t care. I absolutely flew through it and loved every second of doing so. The Art of Being Normal spoke to me in a way I didn’t expect. I lost myself in this story immediately, connecting with both main characters in a way I didn’t see coming. I love reading about queerness and queer friendships, so.. I guess that simply makes sense.

Both David and Leo stole my heart. David knows he’s supposed to be a girl – he/him-pronouns are used throughout the entire book for him – and he’s struggling with it. The only people in the know are his two best friends, Essie and Felix. He has a hard time accepting himself, fearing the reaction of others since an event from the past has been haunting him for years now and that definitely hurt his self-esteem in a bad, bad way.
As for Leo, he had a hard upbringing with a mother ignoring him most the time and not having a real connection with any of his siblings, even his twin. He’s a loner, loves being alone and claims not to need friends. But that’s without David stumbling into his life and refusing to leave.
Seeing those two connect in ways they never expected, opening up to one another – it was a beautiful and, at times, heart-breaking thing to behold.

I feel like I’m simply telling you half the story, but trust me when I say I’m not! There’s simply so much gushing I want to do and it’s hard not to spoil half the stuff that needs sharing. I can only say that there’s transgender rep, transphobia and.. an amazing story hidden in these pages. [Or at least, I wanted to do nothing but gushing before I read other reviews…]

Now I wish I could follow that up with “and there’s not a bad thing about it!” but.. Like I said, after reading some other reviews, I realized there are definitely some huge issues with this novel.

As I mentioned, he/him-pronouns are used throughout the entire book when it comes to David. Even though he feels he should be a girl, the pronouns aren’t adapted to that. Not once. Looking back, that definitely should’ve been the case since pronouns are close to every LGBTQIA+’s heart.

Then we have a character’s sexuality used as a plot twist. At the time, while reading, I didn’t really think much of it but looking back.. I totally see how that simply isn’t right. Nobody would want their sexuality to be the turning point in a story or event. It simply doesn’t work like that and I wouldn’t feel comfortable either. Imagining how me going “Oh, I’m bisexual!” would turn a whole story upside down.. My skin’s crawling just thinking about it..

Another thing mentioned in reviews I read, is how there are transphobic comments made to transgenders by transgenders. It’s been a while since I read this book, so I don’t remember any specific ones but after reading those reviews..  It’s not that hard to believe anymore.

I admit, I was totally seeing five cupcakes here at first, but other reviews changed my mind and in this case.. Well, that’s allowed. I still enjoyed the story and for that, three cupcakes it is.

Have you ever let reading other reviews influence your own review like I allowed with this one? Why? Do you think I should’ve stuck with my first draft?
Or should I have deleted the whole “Good”-section to start with?

5 thoughts on “TRANS REP, DONE WELL? – The Art Of Being Normal by Lisa Williamson”