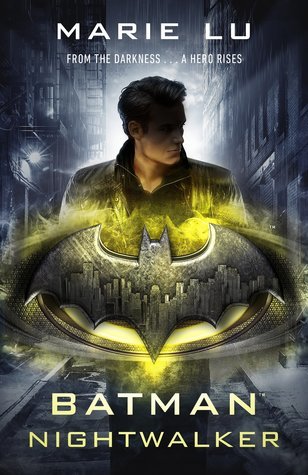 TRIGGERS: Short scene of verbal abuse, from females to male

SYNOPSIS
Before he was Batman, he was Bruce Wayne. A reckless boy willing to break the rules for a girl who may be his worst enemy.

The Nightwalkers are terrorizing Gotham City, and Bruce Wayne is next on their list.

One by one, the city’s elites are being executed as their mansions’ security systems turn against them, trapping them like prey. Meanwhile, Bruce is turning eighteen and about to inherit his family’s fortune, not to mention the keys to Wayne Enterprises and all the tech gadgetry his heart could ever desire. But after a run-in with the police, he’s forced to do community service at Arkham Asylum, the infamous prison that holds the city’s most brutal criminals.

Madeleine Wallace is a brilliant killer . . . and Bruce’s only hope.

In Arkham, Bruce meets Madeleine, a brilliant girl with ties to the Nightwalkers. What is she hiding? And why will she speak only to Bruce? Madeleine is the mystery Bruce must unravel. But is he getting her to divulge her secrets, or is he feeding her the information she needs to bring Gotham City to its knees? Bruce will walk the dark line between trust and betrayal as the Nightwalkers circle closer.

I remember enjoying Wonder Woman: Warbringer by Leigh Bardugo tons back when I read it. Not only because of the writing and the story, but also because of the idea behind the book. Was I thrilled when I found out there’d be more books by different authors? Of course! Was I going nuts when I found out the second book would be written by Marie Lu – who I adore ever since reading Warcross? YUP! Let’s ignore how I – once again – waited ages to actually read Batman: Nightwalker though..

I loved seeing Marie Lu’s view on Bruce Wayne before he became Batman. I really enjoyed seeing how he came to be into a position where he had to stand up and act a hero. Of course, I realize not everyone will agree with Marie Lu’s story, but that’s a very personal opinion any way. I enjoyed it but, in a way, I also had some issues with it – which is why this is mentioned.. two times! Yay! Read on!

Once again, I do have to applaud Marie Lu’s writing as well. Although I had some issues – more about that soon – I enjoyed it. Her forte is definitely writing action-packed scenes because those grabbed me and didn’t me go – at all!

But.. Apart from those scenes? I did feel like everything went so slowly and.. I felt bored at times. It took me over 100 pages to get into the book. Not to mention how, every time I needed to stop reading for a bit, it took me a fairly long while before I was immersed in the story again. I don’t think I ever had that with previous books of hers I read, to be honest, and it was such a pity too. Definitely frustrated me at times. I wanted to give this all the cupcakes, but I just can’t because of that.

Also because of how.. obvious a lot of things were to me. I didn’t feel like I had to read the entire book because I already had a huge feeling about what was going on, what was going to happen and how the puzzle pieces would fall together. I ended up being right about everything and.. well.. that’s not what I wanted, you know?

The blood just pooled beneath him in a perfect circle, like a disk of smooth frosting on a cake.

Then going back to how Marie wrote Bruce’s story.. I enjoyed it, sure, but looking back the plot definitely isn’t up to her normal standards. It all feels way too unrealistic – how a rich kid ends up moping the floors in the city’s worst asylum? How they let an eighteen-year-old talk with someone who’s admitted to murdering three people? It’s all a bit too much, if you ask me.

Sure, they were some pluses, but those feel minor compared to the issues I had with this story, which is why.. I’m going with a “meh” rating.

Have you read Batman: Nightwalker?
How did you feel about it, compared with Marie Lu’s other work?
How do you feel about superhero stories in general? Like? Dislike?

12 thoughts on “A LOT OF ACTION, BUT STILL.. SLOW? – Batman: Nightwalker by Marie Lu”