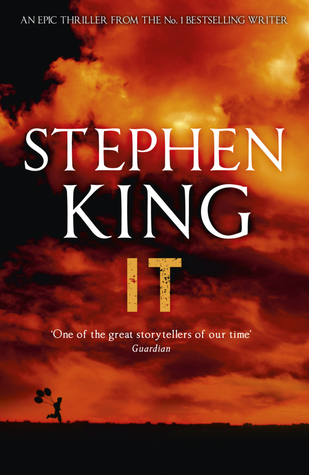 Before I start this review, I want to point out there won’t be a weekly reading update this time. Why? Well.. Because I’m on holiday, sold my laptop and.. am not able to post it! Unless I’d go to some kind of internet cafe and I really don’t feel like doing that so yeah.. I might just pop in with an update this weekend though. Let’s hope I get in a lot of reading before then! Also – HAPPY HALLOWEEN! Hope you get tons of candy and can enjoy some creepy movies or reads today.

Anyway. I was quite enjoying my read of IT up until I read the final quarter of the book and then it all went down the drain. I was totally willing to rate this book four or four and a half cupcakes but now.. I’m not really all that sure anymore. This novel contains a lot of triggers, very harsh scenes and.. one scene simply grossed me out entirely. Felt too shocking. Too over the top. Too wrong. It actually made me skim the last forty-ish pages of the book and I’m not even sorry about it either. So.. Let’s see, huh. Note that there will be spoilers in the “bad” part of this review!
If you feel like reading my past reviews, here’s the link to part one and the link to part two and three!

Let’s start with a short recap of all the things I mentioned so far. The main cast consisting of one girl and six boys and King switching between pretty much all their POV’s all the time is definitely the main thing when it comes to his writing – I’m ignoring the elaborate writing style because that’s just.. King – in this book. I could easily tell them all apart, so yay me.
As I pointed out in my last IT reading update, the story really starts halfway through the book. After that, things move along more quickly and the size of the novel felt less daunting to me than it did at first. I knew I was going to be sucked in, which made reading a 1400 page monster tons easier!

Another fun thing to mention is.. maybe how I expected to be absolutely creeped out while reading IT, but that never really happened? Sure, there were some moments that gave me the creeps a bit, but not in the nightmare-provoking way I was expecting it to.

Spoilers are mentioned here, so only read on if you don’t mind reading those! On the contrary, there were so many other things I had issues with during the last quarter of this book. Some of those things actually angered me to no end and caused me to skim the last forty-ish pages of the book – like I mentioned in my intro.  Not only did the bullying to into the very extreme, but there is also a scene where Beverly, the only girl in our main cast, has sex with all the other boys. Six boys. At the age of eleven / twelve. I just.. I almost threw up, okay? I was angry, nauseous and even more angry that something like that was included because it is not. okay. and I wasn’t okay after reading it either. I’m still angry about it and I just know it impacts my rating of this book a whole lot.

Am I the only one who read this book and.. kind of regrets it?
Do you know any spooky books a wuss like me might enjoy – and maybe even convince me to cross over to the dark side of horror reads?

12 thoughts on “PART FOUR OF FOUR – IT by Stephen King”