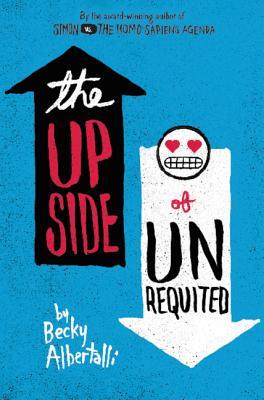 SYNOPSIS
Seventeen-year-old Molly Peskin-Suso knows all about unrequited love. No matter how many times her twin sister, Cassie, tells her to woman up, Molly can’t stomach the idea of rejection. So she’s careful. Fat girls always have to be careful.

Then a cute new girl enters Cassie’s orbit, and for the first time ever, Molly’s cynical twin is a lovesick mess. Meanwhile, Molly’s totally not dying of loneliness—except for the part where she is. Luckily, Cassie’s new girlfriend comes with a cute hipster-boy sidekick. If Molly can win him over, she’ll get her first kiss and she’ll get her twin back.
There’s only one problem: Molly’s coworker, Reid. He’s a chubby Tolkien superfan with a season pass to the Ren Faire, and there’s absolutely no way Molly could fall for him.

I honestly cannot believe I waited this long to read The Upside of Unrequited. It’s not like I didn’t want to read it, I simply didn’t get around to it? Other books kept distracting me and now I’m blaming all those books for keeping me from this precious, little gem. I fell in love, you guys. I seriously did. So don’t expect a decent review – simply expect a whole lot of love. A whole lot of love.

The thing I already knew regarding Becky Albertalli is that I absolutely love her writing. I loved Simon vs. the Homo Sapiens Agenda and I loved Leah on the Offbeat. I just knew that – at least – writing-wise, she would not disappoint. I would be able to fly through this novel and I did. I did! It took me little to no time and I had finished it. Looking back, I’m even wishing I had savored it more because it was such an experience and I loved every second of it.

Because that’s the thing about change. It’s so painfully normal. It’s the most basic of all tragedies.

All the diversity. Seriously. There are so many representations in The Upside of Unrequited – I was baffled. Queer moms, a pan-sexual character, a bisexual character, plus-sized rep, Jewish characters, mention of anxiety! There’s so much going on and it never feels like it’s too much. On the contrary. It’s perfect.
There are also moments when certain things are mentioned that aren’t okay, but it’s challenged in the best way every single time. That alone made me fall even more in love with this book. But there’s more…

I mean, I think people have this mentality that sex is only real if it involves a penis.

The way the cast talks so normally about themes that are “meant to be” taboo – sex specifically – is absolutely amazing. I love how those conversations are handled in a way that shows it’s normal to talk about certain subjects; that there’s nothing to fear; that it’s normal to be curious, to not know certain things and wonder about others. It’s a message every teenager needs to get, instead of acting like it’s normal not to talk about it at all.

How do people come to expect that their crushes will be reciprocated? Like, how does that get to be your default assumption?

As for the characters.. I don’t even know where to start. There was such geekiness and nerdiness and cuteness and.. I swooned pretty much throughout the entire novel because it all felt so relate-able and recognizable. I think I’m just going to stick with one huge character mention though:
Our main character, Molly, is definitely the queen of them all. I could recognize myself in her pretty darn perfectly – except that I’m very bisexual – and understood what she was going through. It often felt like I was reading my own thoughts, my own reactions to events instead of a character’s ones and.. that’s something truly special, don’t you think? I was invested in her story like no tomorrow. I laughed, giggled, teared up, cried, started laughing again, swooned and prayed for good things to happen. I felt her when things got awkward and angry when other things happened. Molly’s precious and I don’t think I’ll be forgetting her any time soon.

I feel like the two negative ends of a magnet. Like there are parts of me that can’t come together.

As for all other characters? Let’s just say they all feel real to me. They’re fleshed out, have their own characteristics, likes and dislikes, passions and.. struggles. Especially the latter is the thing I love most. They actually have their individual struggles that are mentioned – sometimes solved – throughout the story and.. I live for it. Okay. I just do.

There’s something really badass about truly, honestly not caring what people think about you.

There are so many other things I want to rave about, shout about and squeal about but in the end I feel like you just have to read this novel for yourself and experience it like that. If you’re like me, you definitely won’t regret it. On the contrary – you’ll regret not having read this precious gem sooner.

What book impacted you enormously?
Is there a character you’ve come across that felt like YOU?
Have you read The Upside of Unrequited yet? Are you going to?