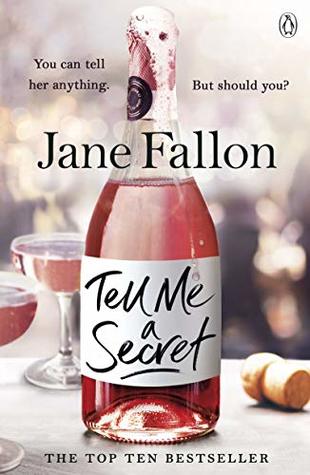 SYNOPSIS
Holly and Roz spend most of their days together. They like the same jokes, loathe the same people and tell each other everything.

So when single mum Holly gets a shot at her dream job after putting everything on hold to raise her daughter, she assumes her friend will be dying to pop the champagne with her.

But is she just imagining things, or is Roz not quite as happy for her as she should be?

As Holly starts to take a closer look at Roz’s life outside their friendship, she begins to discover a few things that don’t add up. Who is the woman who claims to be her ally?

Perhaps it was a mistake to tell Roz all her secrets.
Because it takes two to forge a friendship.
But it only takes one to wage a war . . .

It’s been a while since Jane Fallon released a new book, but I remember really loving her Faking Friends – you can check out my review here! To say I had some high expectations might even be an understatement. In any case, I was entirely ready to jump in and see where Tell Me a Secret would take me. Did it live up to my hopes? Did it disappoint? Let’s see…

Let’s start with the thing I knew would be part of “the good” even before I started reading: the writing. If there’s one thing I can trust Jane Fallon will nail every single time, it’s writing a book in a way that’s very easy to read. As with Faking Friends and My Sweet Revenge, I flew through this one and that’s what I expected.

One thing that was entirely different compared to those books was the focus of the story. Where the main aspect used to be romance and love, Tell Me a Secret focused on friendships way more. It surprised me, since I didn’t expect it to be the case but.. in a good way? Not all changes have to be bad, after all! And now I know Fallon isn’t only brilliant at romance-centered novels, but also friendship-centered ones, yay!

The setting.. Well, if that isn’t one to tempt most of us.. Sure, it doesn’t have to do with books, but our main character – Holly – is a script editor for a television soap! Which means most of this novel is set at her job, where there are scripts galore! Of course, we don’t find out much about the actual show but.. I still loved it since it felt so unique to me. I don’t think I’ve ever read a book with an editor’s office as the setting before?

Now, where the fun’s actually at? The characters!

I really, really felt for our main character, Molly. From the get-go, you notice she wants to be sure of herself, show some confidence since she just got promoted and feels the pressure of people’s expectations. Not to mention how she suddenly has to manage the people she worked with and now work for her. That isn’t an easy feat in normal circumstances, let alone when you’re getting back-stabbed over and over by the skies know who. It really hurt me seeing her like that, noticing how she was crawling back into her shell but.. in the end it also shows the character growth throughout the entire novel. I also loved the relationship with her daughter – which wasn’t overly present, but I loved the glimpses we got!

Which leads me to the side characters, who are so much more fleshed out than I thought they’d be! Having their own issues and battles to fight, it added an entire extra dimension to Tell Me a Secret. One I honestly didn’t expect to get, but got anyway? If that isn’t a bonus! I love it when books show it takes more than just one event or one aspect of someone’s life to ruin things.

The last thing I most definitely have to mention is Jane Fallon’s ability to write toxic characters. Up until now, that’s featured in every book of hers I’ve read and it’s why I keep wanting to read them as well. Having that one character to hate in a book? I know most of us enjoy that, even if it’s just a little bit.
Again, this was present in Tell Me a Secret in an even more.. brilliant way than before, sort of? The way this character weasels their way around everything and anybody is.. admirable and freaky all at the same time. Gave me the chills at times even, haha. I do think they got off too easy at the end though. I would’ve loved a big show-down or something. I don’t know. [But that’s me wanting a book to end with a whole lot of drama for once? I don’t know why. Blame my pregnancy hormones or something.]

Not necessarily a bad thing but I did figure out what was going on specifically – like, details and all – before I was “meant to”. I’m pretty sure this has more to do with having read Jane Fallon’s work before and, thus, having some insight in the way she writes and constructs her stories. It didn’t ruin my reading experience at all, but.. I might have wished it wasn’t so predictable? Just a little bit?

I really enjoyed reading this one. It was different from Jane Fallon’s other work, but that’s exactly why I love it so much! It’s refreshing, but still familiar and that combination did the trick!

How often do you feel like authors stick with the same themes?
Do you like it when they end up doing something slightly different? Or do you prefer it when they make a “dramatic” change in their writing?

8 thoughts on “BACKSTABBING, FRIENDSHIPS AND A TOXIC CHARACTER ~ Tell Me a Secret by Jane Fallon”