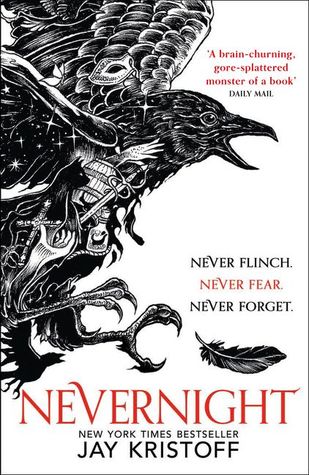 SYNOPSIS
Mia Covere is only ten years old when she is given her first lesson in death.

Destined to destroy empires, the child raised in shadows made a promise on the day she lost everything: to avenge herself on those that shattered her world.

But the chance to strike against such powerful enemies will be fleeting, and Mia must become a weapon without equal. Before she seeks vengeance, she must seek training among the infamous assassins of the Red Church of Itreya.

Inside the Church’s halls, Mia must prove herself against the deadliest of opponents and survive the tutelage of murderers, liars and demons at the heart of a murder cult.

I know, I know. I’m so late to reading this but I just.. kept postponing really? Truth be told, I’ve been eager to read Nevernight for months but since the wait for Darkdawn is still ages of – even more so now I’ve read this one – I forced myself to wait. Until I couldn’t anymore and now.. you’re about to read the consequences.

And people, the consequences are severe. They are the worst. The WORST I tell you. Because I hate myself for not having read this sooner. I hate myself for not having read anything by Jay Kristoff other than The Illuminae Files – which I loved as well. I should’ve known I’d love Nevernight. Actually. I knew I’d love it and I still forced myself to wait?! What kind of person am I..

But let’s dive into the actual review, right?

The writing. Because, skies yes, I’m in love. I’ve been following Kristoff on both Facebook and Twitter for a while and the guy cracks me up all the time. His humor, his sarcasm, the way he says things – not to mention the way he promotes his books – is.. amazing and right up my alley? I expected to find the same in his books but not in the amount Nevernight succeeded at doing. Made my.. year? Basically? Yes, Jay Kristoff is part of the reason 2018 was an awesome year. There! I said it!
I was laughing and snorting all the time, even when I definitely shouldn’t – but I’m pretty sure that’s okay – and was loving every second of it. I was hardly fifty pages in when I realized I need all his books. I’ll be swapping my paperbacks for hardback copies for sure.

The books we love, they love us back. And just as we mark our places in the pages, those pages leave their marks on us. I can see it in you, sure as I see it in me. You’re a daughter of the words. A girl with a story to tell.

As for the actual story and characters? All the love! People warned me Nevernight has a slow start and, even though I have to agree, I was still invested in Mia and her story from the get-go. She intrigued me and I wanted to find out what made her tick, what made her the way she is and what would happen to her once she got to The Red Church – if she’d get there anyway. The grayness of her character got to me and pulled me so hard into this story right until the end – and beyond. She’s vicious, she’s out for revenge, she’s an absolute bad-ass female character all while still maintaining this.. young and naive vibe in ways I didn’t expect but appreciated even more for it. That combination is something you rarely see in books, let alone executed to perfection but Nevernight delivers easily.

I appear to have misplaced the fucks I give for what you think.

The world.. People. Jay Kristoff’s writing is on point. The characters he creates are amazingly fleshed-out and unique. His world-building? Top. Notch. There’s so many background, so many layers to his world – which shows in his footnotes, but more on that later – that you just feel like it could be a real world. I honestly wish it was because it feels so real that it should be real.

I wanted to leave this thing empty since it isn’t necessarily a bad thing, but I have to say the footnotes aren’t really my jam. Although I loved reading them once in a while, the very long ones didn’t appeal to me? Especially since I totally lost track of the story if I did. I did like the shorter ones with sassy, sarcastic comments though, haha. After a while, I got into the habit of skipping the long ones and going back to them after finishing a chapter and that actually worked way better for me!

Never flinch.” A cold whisper in her ear. “Never fear. And never, ever forget.

Do you honestly expect me to give anything less than five cupcakes? I hope not! Because I won’t! I’d give ten if I could! I actually finished it last weekend and LOVED IT AS WELL. Now.. let the torturous wait for Darkdawn commence.

Have you read Nevernight? What did you think?
How do you feel about the footnotes?
If you haven’t read it yet, are you planning on it?
Does anyone know any authors with a similar sense of humor as Kristoff?!

44 thoughts on “I FINALLY READ THIS AND.. GUESS WHAT? ~ Nevernight by Jay Kristoff”