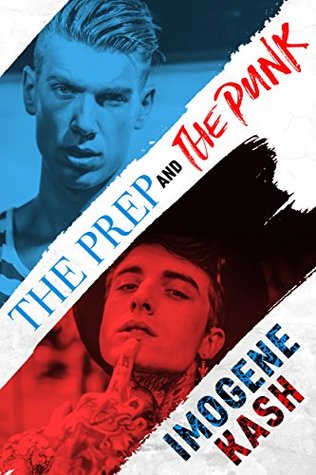 TITLE: The Prep and the Punk #1
AUTHOR: Imogene Kash

SYNOPSIS
In this elite school… locked high away in the Colorado mountains… it’s boys only.

He’s a loner.
Sebastian “Bash” Lowell is used to not fitting in or going with the flow. They call him a punk in the press, so he does his best to live up to the title. He’s practically a professional outcast at this point, having changed schools so many times he’s lost count.
Bash learned long ago it’s far better to stand out than it is to fit in, so he’s made sure everything about him screams “back-off.” Finding friends is more hassle than it’s worth when he knows he’s going to be gone again at his parents’ next whim.
Bash fought to get into the elite, exclusive, private school to avoid his publicity-hungry parents who use him to fuel gossip and fend off far-reaching rumors. Having learned a few tricks from his vicious, media-savvy mother, Bash broke a few laws, ruffled the right feathers, and was exiled to Castle Pines. Now he gets to finish his high school career in peace and quiet, and in the same damn place.
All Bash wants is to graduate and get on with his life outside the limelight. No attachments, school only, so he can focus on getting into his dream college.
Nothing prepared him for Rutledge Darby.

He’s a legacy.
Rutledge “Edge” Alexander Darby IV has had everything in his life handed to him on a silver platter. They call him the preppy-billionaire-heir in the press, although he resists his title at every possible opportunity.
Edge is American royalty, his last name synonymous with wealth and privilege. His family crest adorns the walls of the elite private school he’s attended since before he could walk. Castle Pines is all he’s ever known—a kingdom he’s ruled since birth.
Everyone in his world wants something from him, and Edge isn’t the type to give anything away for free. His life is simple. No attachments, no entanglements, and the only person he trusts to watch his back is his best friend. For their senior year, they fully plan to do as they please and raise as much hell as possible.
Edge longs for something to surprise him. He’s desperate for the unexpected. He’s ready for something real.
Nothing prepared him for Bash Lowell.

I’m not going to lie. Usually I don’t really review the free Kindle books I got on my blog because.. most of them don’t feel worth the hassle? And that’s saying something since you’re about to read a review of a Kindle freebie I got my hands on last year.
Do note that this is smut; this book contains a whole lot of very graphic m/m sexual scenes. If you don’t mind about that, definitely read on because I hope you’ll want to read this as much as I ended up loving it!

I could start, once again, by talking about the writing but that’s not the reason why I wanted to share my review on The Prep and the Punk with you. Although the writing is very fluent and makes you want to read on and on, the main thing I loved about this story is the diversity.

Yes, it’s a queer romance. Both main characters – of which we get the POV’s too – are gay. Even better, the side characters all seem to be part of the LGBTQIA+-family as well! I’m saying seem since there’s some questioning rep going on there as well, which is something we rarely see in books. I pretty much started applauding once I found out – the baby did not like.

When it comes to the characters and their relationships.. I truly didn’t expect to like them all so much. Sure, I had one huge issue – more about that later on – but I totally loved how Bash and Edge’s chemistry, their bond evolved and grew throughout the story. They stumbled, fell and picked themselves back up. They had to fight one another, themselves and others to get where they wanted to be and I thought that beautiful.
So, even though there was a whole lot of detailed smut, it didn’t take away from the story at all! And that, in my book, is worth mentioning since other smutty books tend to lose themselves in all the sex and stop caring about the actual story, the characters and their feelings. That didn’t happen here.

It wasn’t weak to ask for support. It didn’t make me a failure to need someone to lean on occasionally.

Like I said, there’s one thing I really, really didn’t like and that’s.. Bash. He was supposed to be my favorite character. A tattooed, gay boy finding his way in an all boys school? Oh, and pierced, sassy and bad-ass! Let’s not forget about that! I could totally see him becoming one of my favorite characters ever. That is, until he turned into a big puddle of Edge-loving goo overnight and totally lost his bad boy vibes. I honestly didn’t like that, couldn’t like that and.. got annoyed by it? I can get bad boys having a gooey center and being softies once you get to know them but the change was so sudden and his entire bad boy-vibe disappeared entirely.. It felt wrong? And I hated it because I really wanted to like every single aspect of this book!

If you’re into smut and you don’t mind reading an M/M romance set in high school, you’ll definitely want to pick this one up! Although I had that one issue with this book, I still ended up loving it so, so much and cannot wait to read more about those characters in the future!

Do you sometimes find yourself reading smut? What are some of your favorites?
Do you see yourself picking up this one?