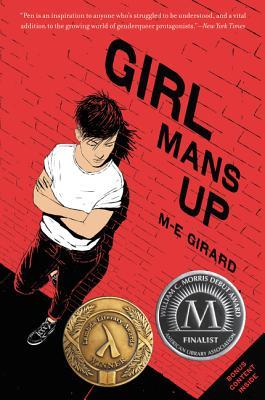 SYNOPSIS
All Pen wants is to be the kind of girl she’s always been. So why does everyone have a problem with it? They think the way she looks and acts means she’s trying to be a boy—that she should quit trying to be something she’s not. If she dresses like a girl, and does what her folks want, it will show respect. If she takes orders and does what her friend Colby wants, it will show her loyalty.

But respect and loyalty, Pen discovers, are empty words. Old-world parents, disintegrating friendships, and strong feelings for other girls drive Pen to see the truth—that in order to be who she truly wants to be, she’ll have to man up.

It’s going to be hard to explain why this book means so much to me, because it does. And I love every word of it. I honestly didn’t expect this contemporary to leave such an impact, to pack such a punch but it did.

There’s a lot of different rep in this novel – not only does Pen struggle with her identity, her parents and their way of life / raising / believing have a huge influence on her as well. To them, a girl should behave like a girl and a boy like a boy. You might be able to imagine how that would backfire when their daughter – Pen – is a girl more comfortable in her brother’s clothes, digs her short hair and.. overall simply doesn’t come across as feminine at all. I’m really hoping I’ll be going about this correctly because I don’t want to hurt anyone with my review. If I do, please let me know so I can make the necessary adaptions!

In a way I really connected with Pen. From my twelve years until about two years ago, I did everything to avoid dresses, skirts, high heels, make-up. Everything. I simply didn’t feel all that feminine, I always got along with boys better and.. I just wasn’t a normal girl, you know? In that aspect, I recognized a lot of myself in Pen. It was confronting and beautiful at the same time – which made for one unique experience while reading. It also made me somewhat.. nostalgic in a weird way? So.. You can probably see why this book would mean so much to me.

Apart from that, there’s Pen’s relationships. Not only the very problematic one with her parents, but definitely the one with her best friend, Colby. Now there is one abusive, very wrong friendship. I wanted to punch his face multiple times – if not all the darn time. He uses and abuses her, doesn’t respect her, doesn’t even try to understand her. And he isn’t even the only one..

Her parents are very much the same. First: they’re Portuguese and the author made the choice of showing how they aren’t fully capable of speaking English. I can see how that would hurt people, but in a way.. there are still a lot of people – at least in Belgium – who moved from another country and simply don’t speak our language all that well if at all. I can see why it would be hurtful, but I also understand why the author made this decision. It also adds a kind of extra layer to their beliefs and views.
And those aren’t pretty at all. They’re stuck in their ways, which hurts Pen a lot. Luckily she has her brother, who’s very important to her. Throughout the story they struggle as well, but it’s wonderful to see how they still have this strong connection.

Talking about strong connections.. there are two other friendships that definitely deserve to be mentioned. And the romantic aspect because.. That was acceptance right there. Some parts had me all gooey and smiley, to be honest. Like.. Ugh. Just read it, okay? You’ll definitely notice what I’m talking about if you do!

People should just be allowed to look in the mirror and see all kinds of possibilities.

I know there was way more I wanted to say about this book, but I just.. have a really hard time putting it all into words. Girl Mans Up is a story about self-acceptance, about speaking up, about realizing what relationships are worth it and which ones aren’t. It’s a story about clashing cultures and finding a way to combine them. It’s a  journey of knowing who you are, but fighting to show others as well. It’s.. a lot. And worth a read.

I know a lot of people in the bookish community have had a hard time with either their sexual identity, mental health, or other aspects of their person. So instead of asking something book-related.. I’m simply going to ask..
Are you okay? How are you? What’s going on in your lives that you’re maybe having difficulties with? If you want to talk, I’m here.

4 thoughts on “THIS BOOK MEANT MORE TO ME THAN I ANTICIPATED. ~ Girl Mans Up by M-E Girard”