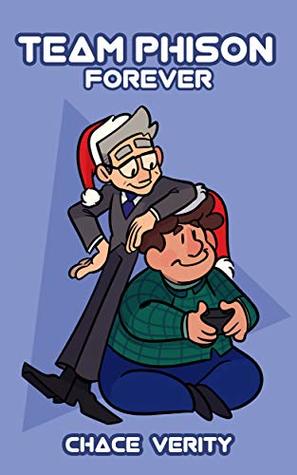 SYNOPSIS
For 55-year-old Phil Hutton, finding a new boyfriend is tough, especially since he’s still hurting from his ex leaving him for a younger man. Online dating has been a soul-crushing experience for the restaurant owner. Too many meat-haters interested in microbreweries or something called geocaching. His matches in the multiplayer for his favorite video game have been equally sucky too.

One night, he encounters a newbie who is so helpless, Phil can’t help showing him the ropes. It doesn’t take long for Phil to become interested in his enthusiastic teammate. 28-year-old Tyson Falls from Georgia loves working as a server in a rinky pizza joint and sees the best in everything. As Phil’s online dating matches get worse and his in-game matches with Tyson get better, he finds himself wanting to pursue the easygoing chatterbox with a thick, sexy drawl.

But Phil can’t get past the fear that Tyson could possibly want a fossil like him. If his brain doesn’t being so damn insecure, it might be game over for his heart.

During the Short-a-thon, I read short reads. Which.. makes sense, I’d think? I added a bit of everything to my TBR and as such, also read some queer romance! Pretty sure I got these two books thanks to an amazing fellow blogger. [Shout-out to Anniek!]

I’m kicking off with the thing I loved about this book even before I started reading. The author mentions things that might trigger or bother people. They even went as “far” – which honestly isn’t far at all but something so rare – to put asterisks next to chapters with sexually explicit content. This makes reading more fun for everyone. You can gloss over it, or go straight to it. Like.. Yup, amazing.

As for the writing, Chace is definitely a fan of using short sentences and I didn’t mind one bit. It makes a short read an even faster read! At least.. Is it only me who reads even faster when the sentences are obviously shorter than in other books or not? Might be. I don’t know.

One of our main characters is Phil, a gay 55 year old restaurant owner. He’s definitely 95% sarcasm and 5% everything else, which I loved. I live for sarcasm, okay. I can’t help but throw around the most sarcastic comments so it’s even more fun to see someone like that in a book!
Then there’s Tyson, the amazingly sweet love interest of 28 years old. Yes, there’s an age gap. I was kind of bothered by it at first, but in the end.. I just liked their story way too much to stay bothered by it? If that makes sense? In any case. Those two together gives for sweet banter, some fights. They show it’s worth making an effort for people you love. They also show communication is key, that dealing with your past is okay. They have so many lessons to teach us and that made these two books even more fun to read.

Honestly, their journey is simply worth following. They meet in an unexpected way, then have to face the fear of meeting in person, then have to find a way to be together and.. just get these books and read them. There short, full of swearing and sarcasm and still some fluff and smut. Basically all you need sometimes? [and you can skip the smut if you want to!]

What are some of your favorite queer reads?
Or favorite authors who tend to always write diverse books?
Give me those recommendations!