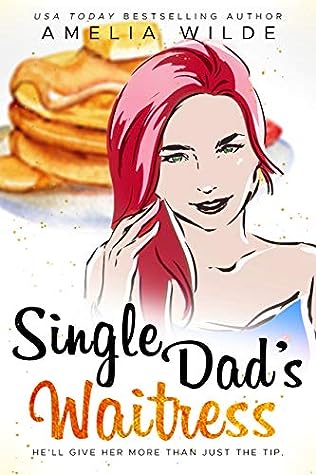 SYNOPSIS
He’s looking for peace and quiet—and she’s a bullhorn in a breakfast café.

All single dad Ryder wants is peace, quiet, and pancakes. Valentine is serving up the exact opposite at the Short Stack Café.

Ryder can’t risk his newfound stability on a whirlwind like Valentine. He definitely can’t risk his heart. But one taste of her has him willing to pick up the tab, no matter the price.

I was slumping a bit – stuck on Legendary and Yes No Maybe So – and decided I needed something light, something quick to read to hopefully get back into a reading groove. A simple search through my Kindle-app had me focused on the cover of this book. I don’t know why but it looked like it’d be a fun and light – and somewhat smutty – read

And it definitely was all of those things. There were a lot of hilariously awkward moments that had me snorting and even guffawing at times. Light? Check. There are some things mentioned that aren’t that light and there’s an event that’s a bit heavier as well but overall.. It really is a light and quick read! And a smutty one. For sure. Our two main characters are very focused on the other’s physical appearance so it’s.. one of those typical smutty books, if you know what I mean? Although not too typical, since I rarely see so many hilarious and awkward situations in books and that was what had me loving this book so much.

Like I said, we have two main characters – Valentine and Ryder – and we get both their points of view. They switch a lot and in short periods of time which makes reading Single Dad’s Waitress even easier and more gripping of a read. The moment you start wondering what the other is thinking, the POV changes and you find out. I really enjoyed that.

As for the smut.. There’s definitely a focus on the sexual aspect since it seems that’s all their relationship is about. In a way that’s a bad thing, but on the other hand.. They don’t use every chance they get to get all dirty and naked so that’s a win. There’s some building up, moments it simply doesn’t happen and a few moments it does. But it’s not too much and that’s what matters most to me when it comes to “those scenes”.

One very important thing I didn’t like at all was how Ryder, at one point, simply leaves his two-year-old daughter with Valentine because he has something important to do. It truly was something important, but I’d never trust someone I’ve barely known for a month to take care of my son all day. I just wouldn’t. Especially not having seen them with other kids before.
There isn’t really any on-page progress in Valentine’s relationship with Minnie either. Something I’d definitely hoped seeing since bringing someone new in a kid’s life is huge. But nope. It’s something that stuck with me while reading and I still can’t get over it.

The language – or the way Amelia writes, maybe? – isn’t really my cup of tea. It reads fluently; that’s not the point! It’s all the “fuck” and “shit” being thrown around that got on my nerves. At times it was so unnecessary but it had to be added in anyway. It’s not that I can’t handle some cuss words but.. these weren’t just “some”. They were very present..

It was the read I needed – I’m more than willing to admit it – but.. I definitely had some issues with this book I can’t simply gloss over to give it a higher rating for “enjoyment”. If you’re in need of a funny but smutty read, this is one for you. That is, if you don’t mind the cussing and.. the daughter-thing.

What’s the most hilarious book you’ve ever read?

One thought on “HILARIOUSLY AWKWARD BUT.. SOME DOWNSIDES TOO. ~ Single Dad’s Waitress by Amelia Wilde”