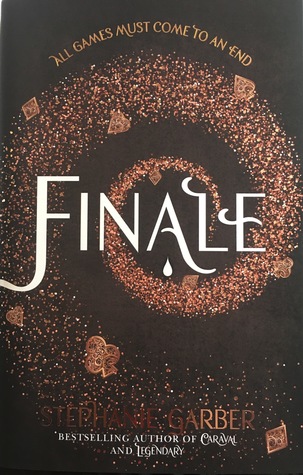 TRIGGERS: Death of loved one
REPS:

SYNOPSIS
Welcome, welcome to Caraval…all games must come to an end.

Meanwhile, Scarlett has started a game of her own. She’s challenged Julian and her former fiancé, Count Nicolas d’Arcy, to a competition where the winner will receive her hand in marriage. Finaly, Scarlett feels as if she is in complete control over her life and future. She is unaware that her mother’s past has put her in the greatest danger of all.

Caraval is over, but perhaps the greatest game of all has begun―with lives, empires, and hearts all at stake. There are no spectators this time: only those who will win…and those who will lose everything.

The only times when I write a review on a sequel is when I either got an ARC of it, or when I loved it so much I can’t help myself and need to write down my thoughts and share them with you guys. This time it’s definitely the latter because I finally ended up reading Finale – after rereading Caraval and Legendary – and.. I have thoughts. And feelings.

Finale felt like one giant, magical rollercoaster ride to be honest. I started reading and felt like I didn’t want a break. I didn’t need a break. I simply wanted to read on and lose myself in Scarlett and Tella and Legend and Julian and.. Jacks. Yup. Jacks too.

Whereas Caraval was written from Scarlett’s perspective and Legendary from Tella’s, Finale switches between the two sisters. Since I felt like I enjoyed Tella’s perspective most after reading Legendary, I was pleasantly surprised to find myself liking Scarlett more and more. She already was driven by love but it seemed to me Stephanie put more depth into her character when writing Finale then she did in the previous books.

Occasionally, there are minutes that get extra seconds. Moments so precious the universe stretches to make additional room for them, and this was one of them. People don’t get pauses like these very often. Some people never receive them at all.

That depth was more than present in all other characters as well. At first I was torn with who to pick as my favorite character but.. I think I’ll have to go with Legend anyway. No surprise there, I guess? It’s always the broody, secretive ones. And he has wings tattooed on his back. How could I not?! Anyway. I loved the evolution he went through. He definitely wasn’t the only one changing throughout the story, but his appeared to be done best of all? Although I have to say I truly enjoyed Jacks’ character as well.

Am I allowed to take a moment to gush over Stephanie’s writing? Of course I am! Because it is absolutely magnificent. The way she describes things in this whimsical way that oozes magic.. That alone was plenty of motivation for me to keep on reading. I was lost in the story because of her writing. I’m honestly keeping my fingers crossed to see the same writing style return in her next books. If not.. I might end up being very disappointed? Oh yikes.. Now I’ve jinxed it, right?

The cabin looked as warm as a handwritten love letter, with a stone fireplace that took up an entire wall and a forest of candles dangling from the ceiling.

I can’t really say anything more without spoiling things. The story was beautiful. The pieces of the puzzle fit together. There’s a hint of something that makes me thing we might get a companion novel – or even series?! – but I don’t want to get my hopes up too much so.. yeah.. Five cupcakes – easily!

What’s the best ending to a series you’ve read so far?
Have you read Caraval? Legendary? Finale?!
What did you think?
Are you going to read them?