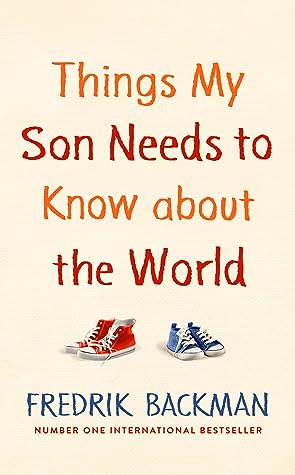 TITLE: Things My Son Needs to Know about the World
AUTHOR: Backman, Fredrik

SYNOPSIS
In between the sleep-deprived lows and wonderful highs, Backman takes a step back to share his own experience of fatherhood and how he navigates such unchartered territory.

Part memoir, part manual, part love letter to his son, this book relays the big and the small lessons in life. As he watches his son take his first steps into the world he teaches him how to cultivate friendships, support a team that loses and tries to explain why, sometimes, dad might hold his hand just a little bit too tightly.

Honestly, I don’t have very much to say about this book apart from sharing it with you guys. If you have a son, or are interested in reading a father’s thoughts, the things he wants to share with his son and more.. This is a book you should pick up.

Even as a mom, a lot of things are so relatable. Some things gave me a bit more perspective in my other half’s role as Jamie’s father too. Not to mention the things they’ll probably want to teach him, tell him and.. well.. let’s just say I’m more prepared now? I think? Who am I kidding, right.

The book switches between fun, funny, hilarious and some very true things. The alternation between all those made it a lighter read, but heavy at times too. It’s like.. Backman succeeds at getting his message across without actually dumping a whole lot of seriousness in it and that‘s the point. Especially if you want your son reading it eventually? I actually think I might hand it to Jamie once he’s old enough. Yup. Might do just that.

In any case, this was a fun and quick read that will probably stay with me longer than I first thought it would. My other half even read three chapters by now and that’s a lot for someone who rarely reads. I’ll be sure to hand the book back to them so they can finish it too, haha.

What is a nonfiction book you enjoyed more than you thought you would?
Do you have any recs for someone who usually stays clear of the genre?

2 thoughts on “FUNNY, HILARIOUS AND TRUE! ~ Things My Son Needs to Know about the World by Fredrik Backman”